Farmers in the middle of the country are about to get hit by what could potentially be the worst October blizzard in U.S. history.  According to USA Today, “the massive size and intensity of this snowstorm is unheard of for October”.  In other words, we have never seen anything like this in the month of October ever before.  Such a storm would have been disastrous enough in a normal year, but this has definitely not been a normal year for Midwest farmers.  As I detailed extensively in previous articles, endless rain and horrific flooding made planting season a complete and utter nightmare for many Midwest farmers this year.  Millions of acres did not get planted at all, and planting was seriously delayed on tens of millions of other acres.  As a result, corn, soybeans and other crops are simply not ready to be harvested in many parts of the Midwest, and now an unprecedented winter storm is barreling directly toward our heartland.

This is a very, very serious situation.  Normally, most corn in the Dakotas and Minnesota is considered to be “mature” by now, but this year we are facing a completely different scenario.

According to the latest USDA Crop Progress Report, only 22 percent of the corn in North Dakota is considered to be “mature” at this point…

Many farmers continue to wait on the sidelines to get into the fields. With freezing temperatures, heavy snowfall, and high winds set to hit the northern Plains this week, the corn in North Dakota is only 22% mature vs. a 75% five-year average, according to Monday’s USDA Crop Progress Report.

We ignore urgent global warnings at our peril City lights in this nighttime view of Earth from space provides “an intuitively graspable view of our planet”. (Photo: NASA Goddard Space Flight Center via Flickr)

A year ago, we revisited the 1992 “World Scientists’ Warning to Humanity.” Signed by a majority of Nobel laureates in sciences at the time and more than 1,700 leading scientists worldwide, the document warned, “Human beings and the natural world are on a collision course.”

It called for a new ethic that encompasses our responsibility to ourselves and nature and that recognizes our dependence on Earth and its natural systems. It also called for stabilizing human population through “improved social and economic conditions, and the adoption of effective, voluntary family planning.” Now, 25 years later, we’ve added two billion people, a 35 per cent increase.

Despite progress in stabilizing the stratospheric ozone layer, all the other problems scientists looked at in 1992 have worsened.

On the declaration’s 25th anniversary in November, more than 15,000 scientists from around the world signed a new warning — “the most scientists to ever co-sign and formally support a published journal article.” The BioScience article states, “By failing to adequately limit population growth, reassess the role of an economy rooted in growth, reduce greenhouse gases, incentivize renewable energy, protect habitat, restore ecosystems, curb pollution, halt defaunation, and constrain invasive alien species, humanity is not taking the urgent steps needed to safeguard our imperilled biosphere.”

It raises concerns about climate change, driven by greenhouse gas emissions from “burning fossil fuels, deforestation, and agricultural production — particularly from farming ruminants for meat consumption.” And it points out, “we have unleashed a mass extinction event, the sixth in roughly 540 million years, wherein many current life forms could be annihilated or at least committed to extinction by the end of this century.”

[ My summary of paper: If you look around for what share Morocco has of phosphate reserves, you’ll see figures of 75 to 85% that will last 300-400 years.  But it’s not a done deal as Walan et al point out.

Phosphate is absolutely essential for high agricultural production, one of the “big 3” nutrients that boosts maximum crop growth (along with nitrogen and potassium). This paper points out that just like oil, it is the flow rate – how much is actually produced per year — that matters, not how much phosphate exists.

Phosphate can be “local”. For example, China and the U.S. use most of their phosphate domestically.

Morocco is the largest exporter and also has the largest deposits. So no worries?  Hopefully not, but there are factors such as below which could lower Moroccan exports:

Inevitably, the combination of rising cost will force phosphate production to peak and then decline, even in Morocco (Bardi 2009).

Extracts from this 26 page paper are below, not in order. There’s great material on the history, location, quality, and other aspects of phosphate as well.  Alice Friedemann, www.energyskeptic.com 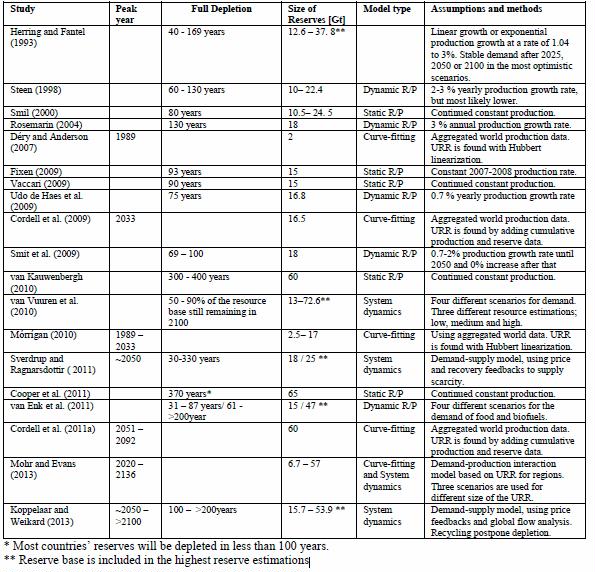 Table 1. Main features of previous studies on phosphate rock depletion and production.
* Most countries’ reserves will be depleted in less than 100 years.
** Reserve base is included in the highest reserve estimations

Californians have been enjoying summer weather in the dead of winter, but the downside is that unseasonably warm temperatures could threaten many of our favorite foods. The state experienced its warmest winter on record last year, and according to current reports, this year could shape up to be another record breaker, compounded by a four-year drought.

California produces the vast majority of our country’s fruits and nuts, and farmers are worried because they depend on water and winter chill for their trees to produce.

The drought has been a top concern for Stan Devoto at Devoto Garden & Orchards, who grows nearly 100 heirloom varieties of apples in Sebastopol. Many of his trees are dry-farmed, meaning they receive no irrigation besides what falls from the sky and is stored in the soil. His farm has received about 27 inches of rain this season (compared to the usual 40 to 50).

Right now, though, Stan is more concerned about the lack of cold than he is about the drought. “We don’t anticipate a good crop this year unless we start getting some really cold temperatures,” he says. “During winter we sometimes get down into the mid to low twenties, but this year there’s been no frost on the roofs, no frost on the grass. It’s scary.”

Winter chill is a vital part of the annual cycle of most fruit trees, including stone fruit (cherries, apricots, plums, and the like), pome fruit (such as apples and pears), and nuts. To bear fruit each year, the trees must undergo a period of winter dormancy, when the tree essentially goes to sleep, dropping its leaves and slowing its metabolism to conserve energy and protect itself from the cold.