Home » Economics » Overreliance on the Pseudo-Science of Economics

Overreliance on the Pseudo-Science of Economics

Overreliance on the Pseudo-Science of Economics

Every year a Nobel Prize in Economics is awarded when in fact there is no “Nobel Prize in Economics.” There is only a “Sveriges Riksbank Prize in Economic Sciences in Memory of Alfred Nobel.” That prize, which was invented by the Swedish central bank nearly 75 years after Alfred Nobel’s death, is an annoyance to the recipients of the five actual Nobel Prizes, those scholars from excluded scientific disciplines such as astronomy, and a living descendant of the donor, Peter Nobel, who has denounced it as a “PR coup by economists.” 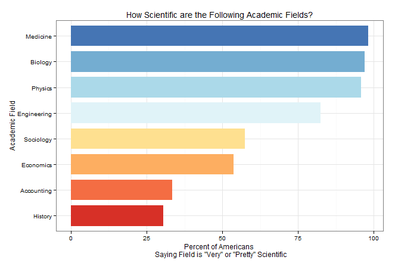 This raises the question: Have we given economists too much authority based on mistaken views about their scientific reputation among established scientists and the public?

When asked about the degree to which various academic fields can be considered “scientific,” the American public is decidedly more mixed toward economics, ranking it well below established scientific fields such as physics or biology, and even below sociology.