Home » Geopolitics » Is the US Planning to Wage War on Russia and China?

Is the US Planning to Wage War on Russia and China?

Is the US Planning to Wage War on Russia and China? 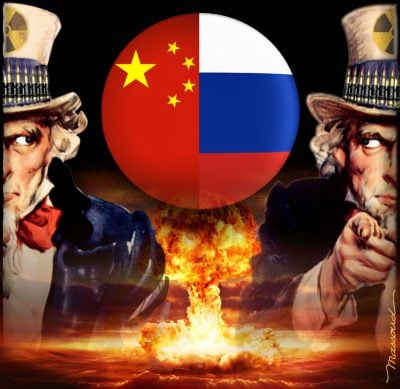 Listen to the interview with Prof. Michel Chossudovsky below.

This is Guns and Butter.

“The Rand Corporation, on contract with the US Army, which commissioned a report examining a war with China. Now, this is called “War With China: Thinking Through the Unthinkable.” The irony of this is that what they examined in this report is whether “we” could actually win a war on China.

Essentially, this is a simulation of a war between the United States and China and it comes up with the conclusion that we’re going to win it. That’s diabolical and it’s criminal. What has China done to the sovereignty of the United States?”

The study (published in 2015) entitled War with China: Thinking the Unthinkable was commissioned by the US Army.

Today’s show: Is the US Planning to Wage War on Russia and China? Michael Chossudovsky is an economist and the Founder, Director and Editor of the Center for Research on Globalization, based in Montreal, Quebec. He is the author of 11 books including The Globalization of Poverty and the New World Order, War and Globalization: The Truth Behind September Eleventh, America’s War on Terrorism and The Globalization of War: America’s Long War Against Humanity. Today we concentrate on the global military agenda, on the evolving restructure of geopolitical alliances, the Nuclear Posture Review, the purpose of the Manhattan Project, and the dangers of nuclear war.

MICHEL CHOSSUDOVSKY: Delighted to be on Guns and Butter.

BONNIE FAULKNER: President Trump’s surprise announcement that the US is leaving Syria caught most people in and out of government by surprise and led to the resignation of Secretary of Defense Mattis. Two thousand US troops will be withdrawn from Syria. What is your assessment of this move?

← JFK, Trump, Russia, and the Deep State Europe on the Brink of Collapse? →