Italy’s current scheme of piling unfunded government spending on top of an already-huge debt is a recipe for disaster.

As a general rule, we worry too much about deficits and debt. Yes, red ink matters, but we should pay more attention to variables such as the overall burden of government spending and the structure of the tax system.

That being said, Greece shows that a nation can experience a crisis if investors no longer trust that a government is capable of “servicing” its debt (i.e., paying interest and principal to people and institutions that hold government bonds).

This doesn’t change the fact that Greece’s main fiscal problem is too much spending. It simply shows that it’s also important to recognize the side-effects of too much spending (if you have a brain tumor, that’s your main problem, even if crippling headaches are a side-effect of the tumor).

Anyhow, it’s quite likely that Italy will be the next nation to travel down this path.

This is in part because the Italian economy is moribund, as noted by the Wall Street Journal.

Italy’s national elections…featured populist promises of largess but neglected what economists have long said is the real Italian disease: The country has forgotten how to grow. …The Italian economy contracted deeply in Europe’s debt crisis earlier this decade. A belated recovery now under way yielded 1.5% growth in 2017—a full percentage point less than the eurozone as a whole and not enough to dispel Italians’ pervasive sense of national decline. Many European policy makers view Italy’s stasis as the likeliest cause of a future eurozone crisis.”

Why would Italy be the cause of a future crisis?

For the simple reason that it is only the 4th-largest economy in Europe, but this chart from the Financial Times shows it has the most nominal debt. 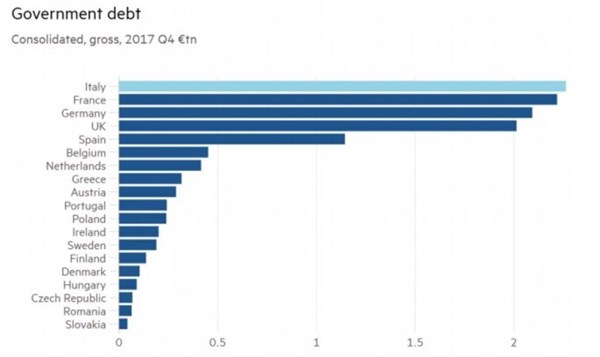 So what’s the solution?