How the Feds Use Transportation Funds to Spy on You

How the Feds Use Transportation Funds to Spy on You 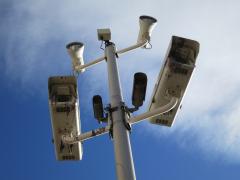 A recent announcement by a local transit authority in Virginia sheds light on how the Department of Homeland Security (DHS) and the Transportation Security Administration (TSA) are building a massive, intrusive surveillance network built on America’s transportation system.

The Greater Richmond Transit Company (GRTC) recently announced plans to install more than 100 live surveillance cameras at stops along a rapid transit line. According to a WTVR report, GRTC plans to install approximately four cameras at 26 Pulse stops along Broad Street. The system will be live 24 hours a day and directly connected to the city’s 911 facility.

The ACLU of Virginia opposes the system. The organization’s director of strategic communications said constant monitoring changes the nature of a community.

“There’s very little evidence that this type of surveillance enhances public safety, and there is every reason to think that it inhibits people. That it causes us to behave differently than we would if we weren’t being watched,” Bill Farrar said, adding that the system will “keep tabs” on people who rely on public transit.

“GRTC has said in promoting this, in promoting the need for this particular line, we want to help people get out of the East End food desert. So we’re saying use this to get the food that you need, but we’re going to watch you while you do it.

According to Style Weekly, “this new system will bring the total number of easily accessible, city or government-owned cameras available to police and other authorities to more than 300, including roughly 200 stationary cameras Richmond police already have easy access to, and 32 cameras owned by city police.”

← America’s long-term challenge #3: destruction of the currency A Faustian Bargain with the Climate Crisis →