A recent power grid failure in New York caused panic and even stocked the fear of an alien invasion.  With so many dependent on the electrical power grid, it is important to be prepared for the worst.

Even president Donald Trump has taken it upon himself to sign an executive order declaring an Electromagnetic Pulse (EMP) could be “debilitating” to the United States’ power grid.  Far too many Americans won’t know what to do when the inevitable finally happens. And things will get dire should we have to live without power for more than one week.

“It is the policy of the United States to prepare for the effects of EMPs through targeted approaches that coordinate whole-of-government activities and encourage private-sector engagement,” said the executive order released by the White House.

A congressional report warned that an EMP attack on the East Coast would kill 90 percent of those in the area over the course of ONE year due to the lack of food, money, fuel, electricity, and medical care.

The infrastructure is crumbling, and while the government claims they intend to secure the power grid, most of us know much better.  The best the rest of us can do is make sure we are armed with knowledge and the survivalist mentality.

Americans, largely, have put their survival in the hands of the government, but if you’re reading this, you probably want to become more self-sufficient. And beginning by preparing for a lengthy power grid failure (regardless of whether it was an EMP attack or an infrastructure failure) is a great start and an excellent first step when fueling your “prepper’s mindset.”

A Power Grid Failure Will Totally Disrupt Your Life: Lessons From Venezuela

A Power Grid Failure Will Totally Disrupt Your Life: Lessons From Venezuela

You must be already aware of the terrible water situation that people in most of the cities in Venezuela is facing. This is the product of the combination of several factors that I will try to explain. But please! Understand that we suffered the consequences of a weirdo military chief that NEVER had any clue about governing like a civilian, but giving orders and commands, and he ordered to seize all the companies and put them under control of the “State” because everyone should have access to water. Indeed our laws say that water is free; I mentioned this in a previous article. Companies therefore quickly found a turnaround to capitalize the right to ADDRESS, extract, and direct the water to the customers who did not pay for the water, but the work of having it “transported”. This is quite important for the reader to accept this. I have that feeling that sometimes people just refuse to believe this sort of things happen in some place in the world, much less in the same American continent. And yes, it happens. It happened to us, and it was about to happen to people in Chile, too, back in the 70s with Allende.

Things that were once easy to get in Venezuela are now impossible to find.

This said I hope you can have a more complete view of what happens when instead of motivated employees, highly trained and well paid, you have underpaid, sad, ill-mannered government employees wearing a T-shirt with Hugo´s face. Well, that happened in lots of companies, originating the disaster we are facing now.

With the recent release of reports from government agencies that warn of potential risk from long term grid failure, it is only prudent to evaluate your readiness for potential problems in our future. Catastrophic events have a habit of showing up unannounced.

When something happens and you have resources to provide for your needs, you automatically have more options at your disposal to work your way through the problems. This provides you with the freedom to act in your own best interests and not be a pawn to others. Those that are dependant on others for their needs are at the mercy of those providing those necessities.

The recent NIAC report expresses a need for community enclaves where people can hunker down while the problems are being fixed. These enclaves would encompass things such as schools, hospitals and other community assets that are necessary to continue providing necessities to the community. Enclaves that can provide medical needs, water, sewer services, communications and security are just some of the things that can allow a population to weather an event with the least amount of discomfort.

The ability of community enclaves to care for the local population allows the government to deploy available assets to fix the problem rather than provide for the daily needs of the population.

Prior session, a massive US power grid failure was seen across the entire United States in one simultaneous fashion. San Fransisco, New York, and Los Angeles were the three main areas that were hit the hardest. Each of the areas experienced challenges or shut downs in business commerce. Also, basic infrastructure such as communication networks, mass transportation, and supply chains experienced challenges. To many this seemed apocalyptic with anaylst citing possible cyber attacks amid mounting geopolitical turmoil across the globe. We’re shocked that mainstream media didn’t revive the failing Russian narrative for another round of fake news to confuse the masses. Personally, I don’t think it was a cyber attack or the Russians, but more of a Space Weather Event.

Space weather refers to the environmental conditions in Earth’s magnetosphere, ionosphere and thermosphere due to the Sun and the solar wind that can influence the functioning and reliability of spaceborne and ground-based systems and services or endanger property or human health.

This is the Planetary K-Index, which 5 or greater indicates storm-level geomagnetic activity around earth. The latest space weather data signals a geomagnetic storm rolled in on April 20, 2017. During the elevated K-waves >5, San Fransisco, New York, and Los Angeles experienced power grid failures simultaneously. 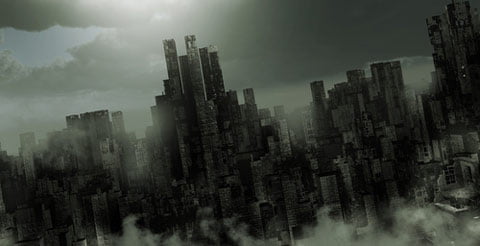 Officials report that business, traffic and day-to-day life has come to a standstill in San Francisco, reportedly the worst hit of the three major cities currently experiencing outages.

Power companies in all three regions have yet to elaborate on the cause, though a fire at a substation was the original reason given by San Francisco officials.

A series of subsequent power outages in Los Angeles, San Francisco, and New York City left commuters stranded and traffic backed up on Friday morning. Although the outages occurred around the same time, there is as of yet no evidence that they were connected by anything more than coincidence.

The first outage occurred at around 7:20 a.m. in New York, when the power went down at the 7th Avenue and 53rd Street subway station, which sent a shockwave of significant delays out from the hub and into the rest of the subway system. By 11:30 a.m. the city’s MTA confirmed that generators were running again in the station, although the New York subways were set to run delayed into the afternoon.

Later in the morning, power outages were reported in Los Angeles International Airport, as well as in several other areas around the city.

The San Francisco Fire Department was responding to more than 100 calls for service in the Financial District and beyond, including 20 elevators with people stuck inside, but reported no immediate injuries. Everywhere, sirens blared as engines maneuvered along streets jammed with traffic.

Traffic lights were out at scores of intersections, and cars were backing up on downtown streets as drivers grew frustrated and honked at each other.