Placards left by supporters of Julian Assange outside the Ecuadorian Embassy on Aug. 20, 2012 in London, England.

A TRUE DEMOCRACY does not allow its government to decide who is a journalist. A nation in which a leader gets to make that decision is on the road to dictatorship.

That is why the new U.S. indictment of Julian Assange is so dangerous to liberty in America.

Many of those documents, including U.S. military reports and State Department cables, were later published by WikiLeaks, but they were also the basis of reporting by major news organizations like the New York Times and The Guardian, which published some of them. The Manning leaks helped reveal long-hidden truths about the wars in Iraq and Afghanistan and the post-9/11 global war on terror. Among the most striking leaks were a classified video of U.S. military attack helicopters killing a dozen people, including two Reuters staffers, in Baghdad in 2007, as well as the more than 250,000 State Department cables, which continue to be an important reference for reporters and researchers studying U.S. foreign policy.

The Manning documents also turned WikiLeaks into a strange new player in the modern journalistic ecosystem. WikiLeaks would obtain materials from sources inside governments and other organizations and then disseminate them, either by publishing them itself or by sharing them with major news organizations. WikiLeaks served as an intermediary between sources and reporters. 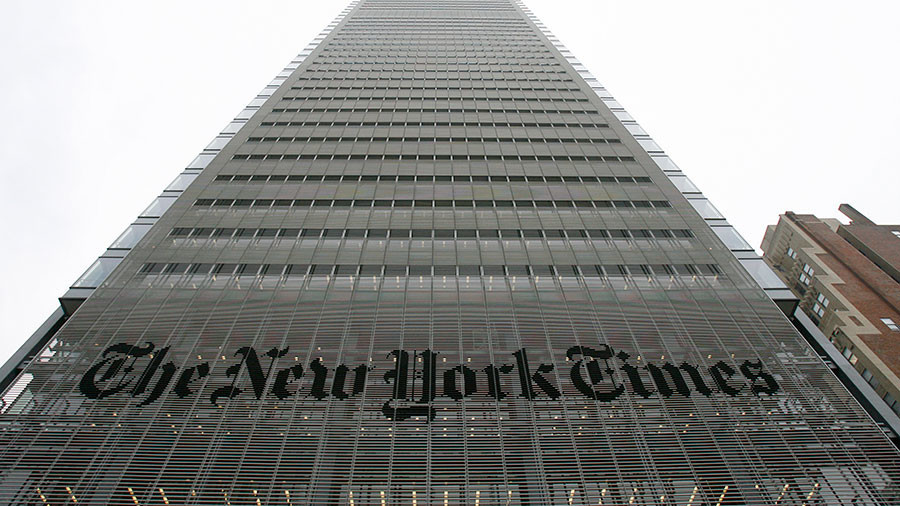 © Gary Hershorn / Reuters
The New York Times was “quite willing” to quash stories at the behest of the government, writes Pulitzer Prize-winning reporter James Risen. He warns that America’s press has been muzzled by “hyped threats” to national security.

In an in-depth retelling of his experience as a national security reporter for the New York Times (NYT), published in The Intercept, Risen explains how, on more than one occasion, the NYT yielded to government demands to withhold or kill his stories – including a bombshell report about the NSA’s secret surveillance program under President George W. Bush.

Jaded by previous experiences of US government interference in his work, Risen writes that his NSA story set him on a “collision course” with his editors, “who were still quite willing to cooperate with the government.” His editors at the Times had been convinced by top US officials that revealing the illegal surveillance program would endanger American lives, Risen said.

Bill Keller, the then executive editor of Times, said the newspaper’s decision to shelve the explosive report, which detailed how the NSA had “monitored the international telephone calls and international e-mail messages of hundreds, perhaps thousands, of people inside the United States without warrants over the past three years,” was motivated by the lingering “trauma” of the 9/11 terror attacks, and the sobering reality that the “world was a dangerous place.”

Risen’s NSA scoop, which later won him a Pulitzer Prize, was eventually published a year after he submitted it to his seniors – but only after Bush had been safely re-elected. Risen said that upon hearing the story was finally going to print, Bush telephoned Arthur Sulzberger, the Times’s publisher, requesting a private meeting to convince him against running the story. I was sitting in the nearly empty restaurant of the Westin Hotel in Alexandria, Virginia, getting ready for a showdown with the federal government that I had been trying to avoid for more than seven years. The Obama administration was demanding that I reveal the confidential sources I had relied on for a chapter about a botched CIA operation in my 2006 book, “State of War.” I had also written about the CIA operation for the New York Times, but the paper’s editors had suppressed the story at the government’s request. It wasn’t the only time they had done so.

A MARKETPLACE OF SECRETS

BUNDLED AGAINST THE freezing wind, my lawyers and I were about to reach the courthouse door when two news photographers launched into a perp-walk shoot. As a reporter, I had witnessed this classic scene dozens of times, watching in bemusement from the sidelines while frenetic photographers and TV crews did their business. I never thought I would be the perp, facing those whirring cameras.

As I walked past the photographers into the courthouse that morning in January 2015, I saw a group of reporters, some of whom I knew personally. They were here to cover my case, and now they were waiting and watching me. I felt isolated and alone.

My lawyers and I took over a cramped conference room just outside the courtroom of U.S. District Judge Leonie Brinkema, where we waited for her to begin the pretrial hearing that would determine my fate. My lawyers had been working with me on this case for so many years that they now felt more like friends. We often engaged in gallows humor about what it was going to be like for me once I went to jail.

“He made my life miserable for a long time.”

Earlier this year I did an hour long interview with James Risen. We discussed his case with the Department of Justice, where he was being threatened with incarceration for refusing to reveal his source who gave him insights about NSA activities. This was before Obama and Eric Holder decided to drop the prosecution against him.  I saw him give the keynote speech at the luncheon for the Investigative Reporters and Editors 2015 conference and after his talk, in which he lambasted former Attorney General Eric Holder, I asked him to do a brief interview, based on his comments on Obama, Eric Holder and their legacies.

Rob Kall: My guest is James Risen. He was just the luncheon speaker for the Investigative Reporters and Editors conference (1800 attendees)

Rob Kall: I was really hoping you would recap what you said to about 1500 journalists about your experience with the DOJ and Eric Holder and where journalism is today.

James Risen: I think the main point I was trying to make is the legacy of the Obama administration on press freedom issues is a bad one. They had, in my case, sought to eliminate what’s called the reporter’s privilege, which is the ability of reporters to protect their confidential sources in criminal trials and not be forced to testify and identify sources. In my case the judge sided with me and quashed the subpoena from the Justice Department against me. But the Obama administration appealed that to the appeals court and they overturned that decision by the lower court and in their appeal to the appeals court, they said, there is no such thing as a reporters’ privilege in a federal case. And the court sided with them and that had the effect of eliminating the ability, legally, of reporters to protect their sources in federal criminal cases.

Talking to James Risen About Pay Any Price, the War on Terror and Press Freedoms – The Intercept

Talking to James Risen About Pay Any Price, the War on Terror and Press Freedoms – The Intercept.

James Risen, who won the Pulitzer Prize in 2005 for exposing the NSA warrantless eavesdropping program, has long been one of the nation’s most aggressive and adversarial investigative journalists. Over the past several years, he has received at least as much attention for being threatened with prison by the Obama Justice Department (ostensibly) for refusing to reveal the source of one of his stories—a persecution that, in reality, is almost certainly the vindictive by-product of the U.S. government’s anger over his NSA reporting.

He has published a new book on the War on Terror entitled Pay Any Price: Greed, Power and Endless War. There have been lots of critiques of the War on Terror on its own terms, but Risen’s is one of the first to offer large amounts of original reporting on what is almost certainly the most overlooked aspect of this war: the role corporate profiteering plays in ensuring its endless continuation, and how the beneficiaries use rank fear-mongering to sustain it.