The pronounced aftershock from what would historically be considered as very mild interest rate hikes in Canada is continuing.

Bloomberg reported that the number of consumers seeking debt relief was up 5.1% to 11,320 in November, according to the Ottawa-based Office of the Superintendent of Bankruptcy. Combining October and November’s numbers, there were 22,961 consumer insolvency filings, the most since 2011.

These new numbers come on the heels of the bank of Canada raising its key lending rate five times since the middle of 2017. Like in the US, the impact of rising rates on the economy is being “monitored closely”, which is a nice way to say “obsessed over by central banks in order to continue to force all asset classes to rise in price”. 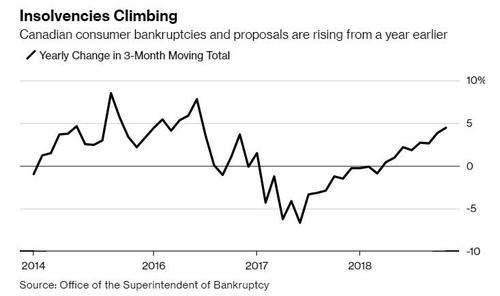 David Lewis, a board member at the Canadian Association of Insolvency and Restructuring Professionals, told Bloomberg: “We’re seeing a bump, and in some provinces that bump is significant.”

Insolvency filings were up in every province except PEI, which was unchanged. Alberta saw insolvencies rise 16%. Filings in Ontario were estimated to have risen 1% in 2018 after declining for eight straight years. Insolvency firm Hoyes, Michalos & Associates Inc. estimates that Ontario will see a minimum of a 2% to 5% jump in insolvency filings in 2019. If rates continue to rise, they predict as much as an 8% jump.

66% of Ontario’s insolvency filings were consumer proposals, which is reportedly the highest year on record. You can view the country’s total insolvencies for November 2018 in the chart below. 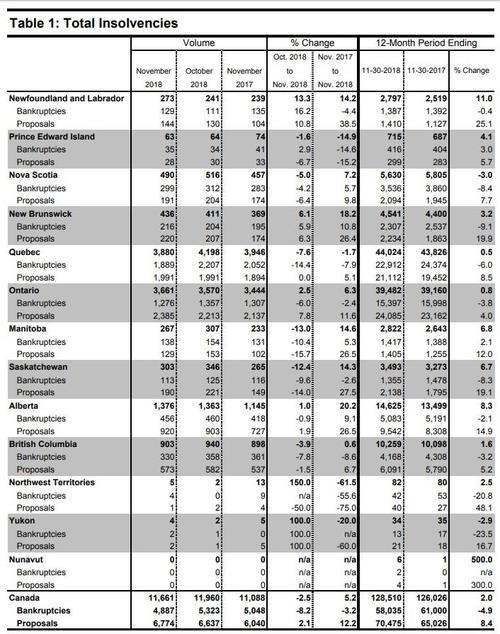 We had previously offered a preview of this inevitable increase after October’s insolvency numbers also grew.

Chantal Gingras, chair of the Canadian Association of Insolvency and Restructuring Professionals stated in early December:

← The Tragedy Of The Euro Russia Backs Away From Dollar AGAIN: Shifts $100 Billion To Yuan, Yen, And Euro →