Just in time for American consumers to be “held hostage” by high energy prices as the WTI front-month contract eclipses $75 for the first time in three-and-a-half years, meteorologists are forecasting a heat wave that could drive temperatures on the East Coast into the 100s as Americans prepare for the July 4 holiday.

In anticipation of the high temperatures, the National Weather Service issued a heat advisory affecting the northeast and mid-Atlantic from Virginia to Maine. “Heat advisories and some excessive heat warnings are in effect from central Virginia to eastern Maine. High temperatures in the 90s, combined with high dewpoints, are expected result in heat indices of 95 to 110 degrees for many areas.”

Furthermore, peak temperatures of 105-110 Wednesday afternoon could make even simple activities like walking outside dangerous. 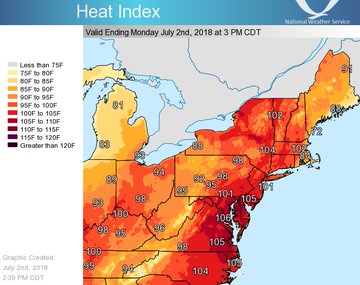 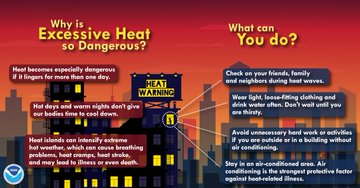 ✔
Ooof! Peak heat indices of 105-110 degrees this afternoon make even just walking home from work potentially dangerous. Limit time outdoors if you can and drink water, even if you don’t feel thirsty.

The heat is so bad in some areas that, according to Fox News, nearly 150 elderly people had to be evacuated from a long-term care facility in Mount Holly, NJ following a mechanical problem that shut down the facility’s air conditioning and power.

Anybody planning to spend time outdoors, in parks or at the beach, should take precautions like staying hydrated and making sure there’s enough water on hand to avoid heatstroke, according to ABC 7.

The New York State Office for the Aging issued a warning to senior citizens to “stay inside” during the heat wave, as hot weather can be particularly dangerous for the elderly.

The heatwave looks like it will break on Wednesday with an afternoon thunderstorm expected in a few areas. But high temperatures are expected to persist until the end of the week.

← Stock markets look ever more like Ponzi schemes Does Economic Growth Cause Inflation? →