Home » Economics » A State of Confusion

A State of Confusion

By olduvai in Economics, Environment on December 27, 2015.

A State of Confusion

In the wake of Paris and COP21 both sides are claiming victory. The Greens believe they finally have a treaty that will deliver the dismantling of the fossil fuel industries and capitalism propelling the human race into a renewable idyll. The Sceptics see Paris as toothless mush that will likely deliver nothing apart from hardship on already struggling economies. The impact on YOU will of course depend upon the voluntary commitments made by YOUR government. And so I set off to find the UK INDC (Intended Nationally Determined Contribution) to discover that the UK does not have one. It is part of an EU “bid” submitted by Latvia that says: 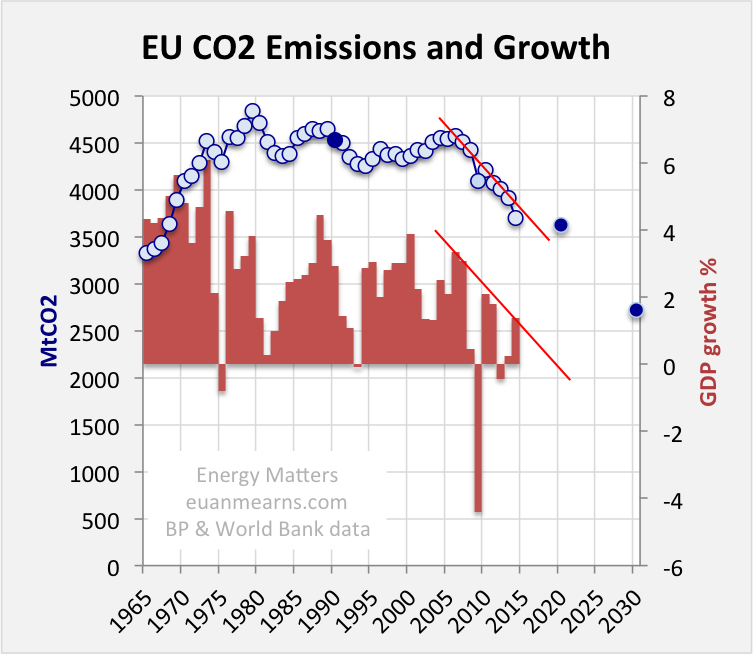 In dark blue the reference year of 1990 and the target years of 2020 and 2030. CO2 emissions from BP, GDP growth from The World Bank. Implementation of Kyoto in 2005 sent Europe’s CO2 emissions onto a downward trajectory… and GDP growth with it? The rise in energy prices caused by a peak in conventional oil production, unsustainable growth in debt, the € project and the outbreak of WWIII make the big picture somewhat more complex.

So this is not a “National” but a group submission, and while it says “binding”, the Paris treaty is not. I guess some major horse trading lies ahead within the EU group, which as we all know is currently a picture of gracious harmony. The EU has found that recession and depression are the most effective way of cutting greenhouse gas emissions and the question does need to be asked to what extent climate and energy policies have created that state (see chart)?

← Why the oil price slump hasn’t kickstarted the global economy Reinventing Banking: From Russia to Iceland to Ecuador →