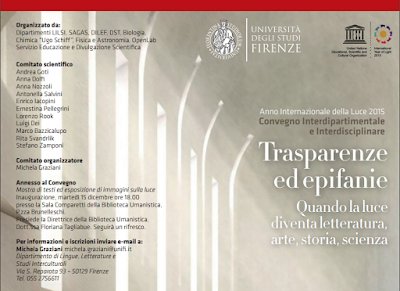 It was yesterday that I gave a talk on climate at a meeting in Florence. It was a rather formal meeting, in the “Aula Magna” of the University of Florence, and my talk was part of a multidisciplinary series of lectures. I gave my talk  to a public mainly composed of faculty members, although only some of them were physical scientists.

It was not a specialized talk, but I tried to explain the basic elements of what we know about the earth’s climate. How more than a hundred years of research has led to developing a new understanding of what makes climate change. I said that it is a true scientific revolution, on a par with several others as – say – cosmology; linking to a talk given just before by a colleague.

I showed data, mainly about paleoclimate, about over the geological eras, greenhouse gases have been the main element (although not the only one) determining the earth’s surface temperature. And I showed how temperatures are rapidly rising now as a result of human-generated carbon emissions. I described the risks we are facing, and the importance of acting as soon as possible. And I showed my own work on modeling the energy transition to renewables.

And that was it. I received some applauses, then the conference went on. Later on, there was the coffee break; the speakers and the public collected in the open air, in the courtyard of the University’s central building. And, there, someone patted me on the shoulder. He smiled at me and he said, “See, Ugo, how cold is it today? Don’t you think we need some global warming?”

← Ecological Panic: The New Rationale For Globalist Cultism Everyone is the Mother of Victory →