The Federal Reserve Is Destroying America

The Federal Reserve Is Destroying America

Perhaps I should start with a disclaimer of sorts. Yes, I realize that the people working at the Federal Reserve, as well as the other central banks around the world, are just people.  Like the rest of us, they have egos, fears, worries, hopes, and dreams. I’m sure pretty much all of them go home each night believing they are basically good and caring individuals, doing important work.

But they’re destroying America.  They might have good intentions, but they are working with bad models. Ones that lead to truly horrible outcomes.

But since growth in credit drives growth in consumption, the two are concepts are so intimately linked as to be indistinguishable from each other.  They both rest upon an impossibility.  Central banks are in the business of sustaining the unsustainable which is, of course, an impossible job.

I can only guess at the amount of emotional energy required to maintain the integrity of the edifice of self-delusion necessary to go home from a central banking job feeling OK about oneself and one’s role in the world.  It must be immense.

I rather imagine it’s not unlike the key positions of leadership at Easter Island around the time the last trees were being felled and the last stone heads were being erected.  “This is what we do,” they probably said to each other and their followers.  “This is what we’ve always done.  Pay no attention to those few crackpot haters who warn that in pursuing our way of life we’re instead destroying it.”

The Formlessness of Progressivism

The Formlessness of Progressivism

Progressives are often good people with good intentions. However, modern Progressivism has evolved into something so shapeless and amorphous as to amount to little more than a belief in “things that sound nice.” Mainstream Progressives have done an abysmal job of outlining precisely, in their view, the proper role of government and what (if any) limiting principle(s) apply to the state as a whole.

Everything Is Now a Taxpayer-Funded “Right”

Problems with today’s leftism begin with the ideology’s conception of “rights.” In the common laissez-faire view, rights are universal because they do not impose a duty on others to act positively on our behalf. Simply put, the proper view of human rights is that they prohibit us from initiating coercion against others.

Moreover, not only are the rights universal, but they are inherent to being human. To argue that the state confers these rights suggests that the state, through whatever “legitimate” institutions it may possess, can also take them away. This is an unacceptable possibility in a society of free people.

Modern Progressivism, however, has so warped the entire nature of rights as to turn almost any desired good or service into a right.

In this view, private employers refusing to subsidize birth control purchases by employees are violating a woman’s “right” to birth control. Business owners with religious convictions about homosexuality are denying “rights” by refusing to bake cakes for homosexual couples. Offering someone a job that pays wages belowsome arbitrary federal or state mandated minimum is now an act in violation of a “labor right.”

A service once voluntarily offered to the public is now a duty enforced by the violent arm of the state.

The list of our newfound rights is almost endless, but ten conversations with ten different Progressives will yield ten different sets of absolute rights.

ATHENS – Since 2008, bank bailouts have entailed a significant transfer of private losses to taxpayers in Europe and the United States. The latest Greek bank bailout constitutes a cautionary tale about how politics – in this case, Europe’s – is geared toward maximizing public losses for questionable private benefits.

In 2012, the insolvent Greek state borrowed €41 billion ($45 billion, or 22% of Greece’s shrinking national income) from European taxpayers to recapitalize the country’s insolvent commercial banks. For an economy in the clutches of unsustainable debt, and the associated debt-deflation spiral, the new loan and the stringent austerity on which it was conditioned were a ball and chain. At least, Greeks were promised, this bailout would secure the country’s banks once and for all.

A few months later, in the autumn of 2013, a second recapitalization was orchestrated, with a new share issue. To make the new shares attractive to private investors, Greece’s “troika” of official creditors (the International Monetary Fund, European Central Bank, and the European Commission) approved offering them at a remarkable 80% discount on the prices that the HFSF, on behalf of European taxpayers, had paid a few months earlier. Crucially, the HFSF was prevented from participating, imposing upon taxpayers a massive dilution of their equity stake.

Sensing potential gains at taxpayers’ expense, foreign hedge funds rushed in to take advantage. As if to prove that it understood the impropriety involved, the Troika compelled Greece’s government to immunize the HFSF board members from criminal prosecution for not participating in the new share offer and for the resulting disappearance of half of the taxpayers’ €41 billion capital injection.

Why Is Wealth/Income Inequality Soaring?

Why Is Wealth/Income Inequality Soaring?

If conventional labor and finance capital have lost their scarcity value, then the era in which financialization reaped big profits is ending.

Why is wealth/income inequality soaring? The easy answer is of course the infinite greed of Wall Street fat-cats and the politicos they buy/own.

But greed can’t be the only factor, for greed is hardly unknown in the bottom 90% as it is in the top .1%. The only difference between the guy who took out a liar loan to buy a house he couldn’t afford so he could flip it for a fat profit and the mortgage broker who instructed him on how to scam the system and the crooked banker dumping toxic mortgage-backed securities on the Widows and Orphans Fund of Norway is the scale of the scam.

The difference isn’t greed, it’s the ability to avoid the consequences or have the taxpayers eat the losses, i.e. moral hazard. The bottom 90%er with the liar loan mortgage and the flip-this-house strategy eventually suffered the consequences when Housing Bubble 1.0 blew up in spectacular fashion.

Moral hazard describes the difference between decisions made by those with skin in the game, i.e. those who will absorb the losses from their bets that go south, and those who’ve transferred the risks and losses to others.

The too-big-to-fail banks that bought political protection simply shifted the losses to taxpayers. Then the Federal Reserve helpfully paid banks for deposits at the Fed while reducing the amount banks had to pay on depositors’ savings to bear-zero, effectively rewarding the banks with free money for ripping off the taxpayers.

America’s financialized cartel-state system institutionalizes moral hazard. This is one cause of rising inequality, as the super-wealthy are immunized by their purchase of political influence.

The top .1%’s share of the pie has been rising in the era of financialization and institutionalized moral hazard, everyone else’s share has declined: 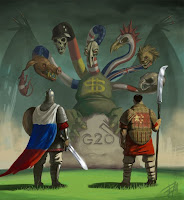 Something’s profoundly wrong with our global financial system. Pope Francis is only the latest to raise the alarm:

“Human beings and nature must not be at the service of money. Let us say no to an economy of exclusion and inequality, where money rules, rather than service. That economy kills. That economy excludes. That economy destroys Mother Earth.”

What the Pope calls “an economy of exclusion and inequality, where money rules” is widely evident. What is not so clear is how we got into this situation, and what to do about it.

Most people take our monetary system for granted, and are shocked to learn that the government doesn’t issue our money. Almost all of it is created by loans made “out of thin air” as bookkeeping entries by private banks. For this sleight-of-hand, they charge interest, making a tidy profit for doing essentially nothing. The currency printed by the government – coins and bills – is a negligible amount by comparison.

The idea of giving private banks a monopoly over money creation goes back to seventeenth century England. The British government, in a Faustian bargain, agreed to allow a group of private bankers to assume the national debt as collateral for the issuance of loans, confident that the state would be able to service the debt on the backs of taxpayers.

And so it has been ever since. Alexander Hamilton much admired this scheme, which he called “the English system,” and he and his successors were finally able to establish it in the United States, and subsequently most of the world.

How Fascist Capitalism Functions: The Case of Greece

How Fascist Capitalism Functions: The Case of Greece

Mark Whitehouse at Bloomberg headlined on 27 June 2015, “If Greece Defaults, Europe’s Taxpayers Lose,” and presented his ‘news’ report, which simply assumed that, perhaps someday, Greece will be able to get out of debt without defaulting on it. Other than his unfounded assumption there (which assumption is even in his headline), his report was accurate. Here is what he reported that’s accurate:

He presented two graphs, the first of which shows Greece’s governmental debt to private investors (bondholders) as of, first, December 2009; and, then, five years later, December 2014. This graph shows that, in almost all countries, private investors either eliminated or steeply reduced their holdings of Greek government bonds during that 5-year period. (Overall, it was reduced by 83%; but, in countries such as France, Portugal, Ireland, Austria, and Belgium, it was reduced closer to 100% — all of it.) In other words: by the time of December 2009, word was out, amongst the aristocracy, that only suckers would want to buy it from them, so they needed suckers and took advantage of the system that the aristocracy had set up for governments to buy aristocrats’ bad bets — for governments to be suckers when private individuals won’t. Not all of it was sold directly to governments; much of it went instead indirectly, to agencies that the aristocracy has set up as basically transfer-agencies for passing junk to governments; in other words, as middlemen, to transfer unpayable debt-obligations to various governments’ taxpayers.

One thing that the world is not in short supply of these days is bad banks. They are everywhere, it seems. But there are bad banks, and there are Bad Banks. This article is about the latter, the officially dubbed “Bad Banks” launched by governments and central banks to conceal the rising tide of triple-F toxic junk (derivatives, securitized debt, non-performing loans…) that threatens to engulf the world’s financial system.

In theory, SAREB was never meant to exist: “There will be no Bad Bank in Spain, and we will establish procedures that will not be burdensome for taxpayers.” Those were the famous words of Spanish PM Mariano Rajoy during the first few months of 2012. The promise was made on numerous occasions, and not just by Rajoy but also by his Minister of Economy (and former Lehman advisor) Luis de Guindos.

But in politics, promises are not made to last; they are there to be broken. By December of that same year, Sareb was born and Spanish taxpayers were left holding the tab for the biggest bank bailout in Spanish history.

Fast forward to today. Sareb is hemorrhaging. In 2014 the firm’s total losses were €585 million, more than double the amount registered in 2013, its first full year of operations (€260.53 million). It’s a stark contrast from the rosy picture painted by KPMG, the firm hired by the government to draw up Sareb’s original business plan. According to KPMG, investor returns, based on “conservative estimates,” would be in the order of around 15%!