The Stuff of Our Lives: The Seneca Collapse of Relocating

The Stuff of Our Lives: The Seneca Collapse of Relocating

The experience of relocating is curiously similar to an archaeological excavation of the ruins of a disappeared empire. Above, you can see two jars filled with old coins recovered from the nook and crannies of my house after emptying it of everything. Mostly these are old Italian “lira” coins, others are foreign coins and, in the smaller jar, you can see an Italian “gettone” used for making calls at public phones up to a few decades ago. This stuff has no monetary value, it is just a marker of passing time.

You know that the “Seneca Effect” has to do with overshoot and collapse. From the time when the Roman philosopher Lucius Annaeus Seneca noted that “growth is slow, but ruin is rapid,” I keep finding new examples of application of the idea. One that I recently experienced had to do with relocating: moving away from the home where my family had been living since 1965. From then on, this 340 square meters (ca. 3600 ft2) house had been gradually filling up with all sorts of stuff. Emptying it in a couple of months of work was quite an experience. “Sobering” is the correct word, I’d say.

I don’t know if you are all good followers of Feng Shui, striving for good vibes and not too much stuff in your home. I didn’t consider myself as an adept of that philosophy, but I didn’t see myself as a serial accumulator of useless stuff, either. Well, I had to reconsider my position. I was a serial accumulator. Really, the amount of stuff that came out of my place was so large to be bewildering. And so much of it we had to throw away — bewildering, too. We are still a little bewildered, but the most intense part of the saga seems to be over, so maybe I can report about my experience in this post. 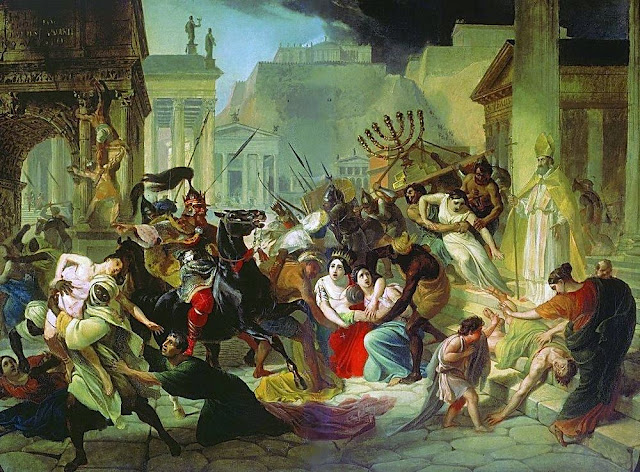 The reasons for the fall of the Western Roman Empire have remained a mystery for modern historians, just as for the Romans themselves. Yet, recent data from the Greenland ice core provide us with new data on collapse of the Empire, showing how fast and brutal it was – a true “Seneca Collapse.” Could our civilization go the same way? (above: the sack of Rome by the Visigoths of King Alaric in 410 AD).
The Ancient Romans never understood what hit them. Nor did later historians: there exist literally hundreds of theories on what caused the fall of the Roman Empire. In 1984 Demandt listed 210 of them, ranging from moral decline to the diffusion of Christianity. Today, some historians still say that the fall is a “mystery” and some attribute it to the improbable piling up of several independent factors which, somehow, happened to gang up together.
Why is it so difficult to understand something that was so massive as the fall of the Western Empire? There is more than one reason, but one is the lack of data. We have scant written material about the last centuries of the Empire and very little has arrived to us in terms of quantitative data. Things are changing, though. Modern archaeology is generating astonishing results telling us a lot about the mechanisms of the collapse of the ancient Empire. For instance, look at this graph: (from Sverdrup et al., 2013): 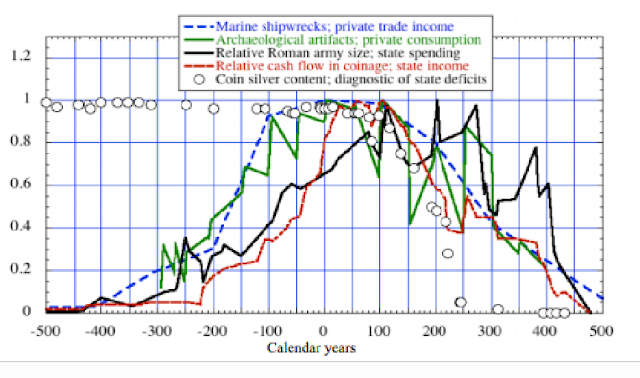 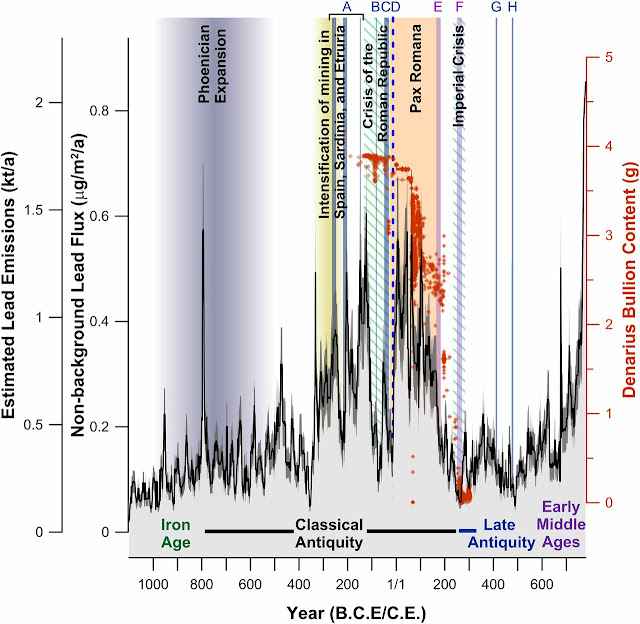 The View from Les Houches: The Seneca Collapse

The View from Les Houches: The Seneca Collapse 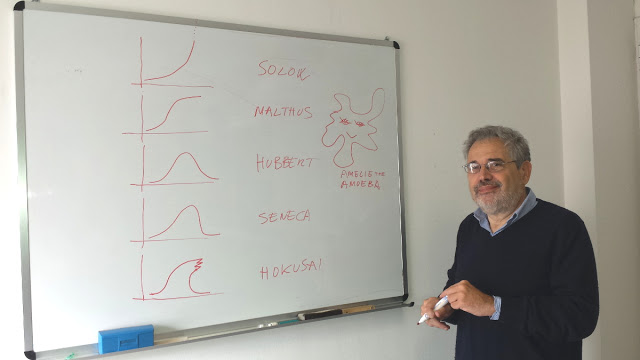 I gave a presentation focused on the Seneca Effect at the School of Physics in Les Houches this March. Here I show various concepts associated with overshoot and collapse with the help of “Amelie the Amoeba” (This picture was not taken in Les Houches, but in an earlier presentation in Florence).

Here are some commented slides from my presentation. First of all, the title: 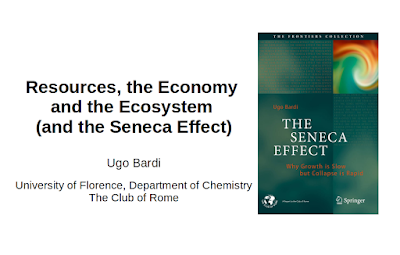 And here is an image I often use in order to illustrate the plight of humankind, apparently engaged in the task of covering the whole planet Earth with a uniform layer of cement, transforming it into Trantor, the capital of the Galactic Empire of Asimov’s series “Foundation” 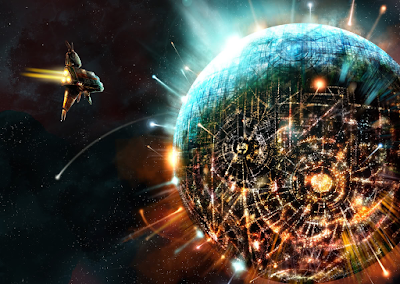 I moved on to illustrate the “new paradigm” of resource exploitation: the idea that mineral resources never “run out”, but simply become more and more expensive, until they become too expensive. 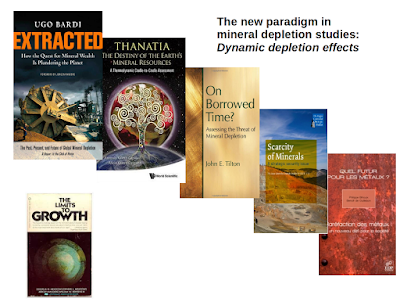 It is not a new idea, it goes back to Stanley Jevons in mid 19th century, but for some reason it is incredibly difficult to make it understandable to decision makers: 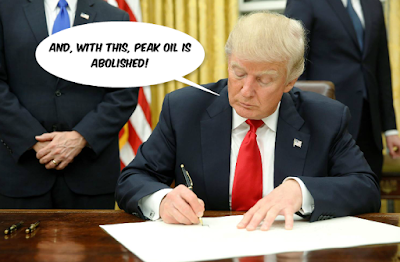 Then, I spoke about the Seneca effect, there is a lot to say about that, but let me just show to you one of the slides I showed during the talk: the Seneca Cliff does exist! 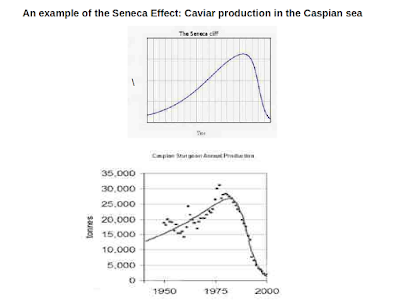 Fisheries are an especially good example of overexploitation (or perhaps a bad example, there is nothing good about destroying all the fish in the sea. And this leads to a rather sad observation: 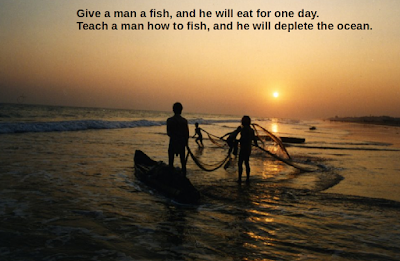 I also showed how the Seneca Effect can be used for good purposes, that is to get rid of things we need to get rid of. This is an image from a paper that we (Sgouris Sgouridis, Denes Csala, and myself) published in 2016. 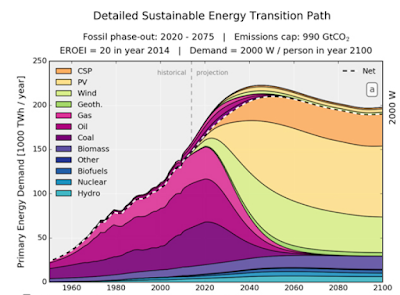 You see the Seneca cliff for the fossils, the violet part of the curve. It is what we want to happen and it would be possible to make it happen if we were willing to invest more, much more, in renewable energy. But, apparently, there is no such idea on the table, so the future doesn’t look so good.

But never mind. We keep going and, eventually, we’ll arrive somewhere. In the meantime: 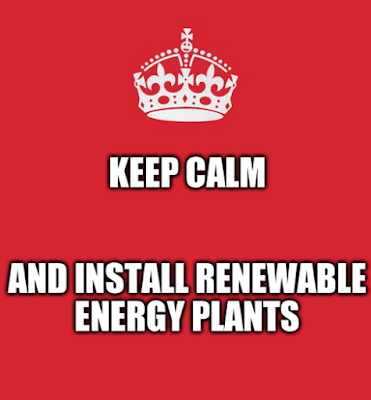 The Golden Rule of Technological Progress: Innovation Doesn’t Solve Problems, It Creates Them

The Golden Rule of Technological Progress: Innovation Doesn’t Solve Problems, It Creates Them 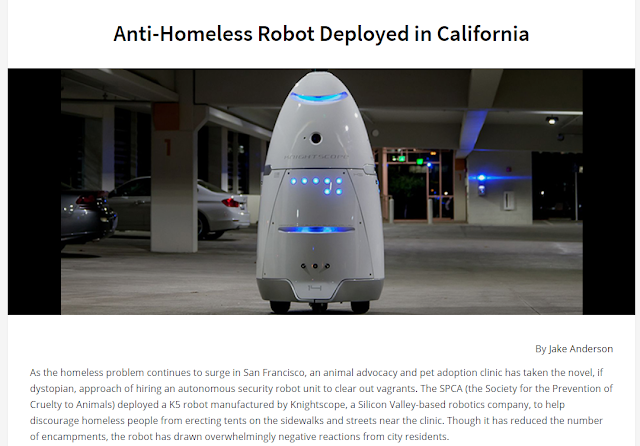 See that thing up there? It is an autonomous security robot, something that’s becoming fashionable nowadays. Obviously, for every problem, there has to be a technological solution. So, what could go wrong with the idea that the problem of homeless people can be solved by means of security robots?

There is something badly wrong with the way we approach what we call “problems” and our naive faith in technology becomes more and more pathetic. And now we are deploying security robots all over the world. Surely a “solution” but it is not so clear what the problem is.

The story of this silly robot made me think of a post that I published a few months ago where I stated what I called “the golden rule of technological innovation: “innovation doesn’t solve problems, it creates them”. And the more I think about that, the more I think it is true.

The Coming Seneca Cliff of the Automotive Industry: the Converging Effect of Disruptive Technologies and Social Factors 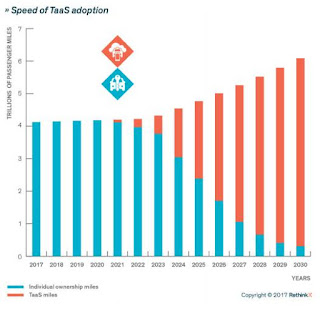 This graph shows the projected demise of individual car ownership in the US, according to “RethinkX”. That will lead to the demise of the automotive industry as we know it since a much smaller number of cars will be needed. If this is not a Seneca collapse, what is?

Decades of work in research and development taught me this:

Innovation does not solve problems, it creates them.
Which I could call “the Golden Rule of Technological Innovation.” There are so many cases of this law at work that it is hard for me to decide where I should start from. Just think of nuclear energy; do you understand what I mean?

The Soft Belly of The Oil Industry: an Upcoming Seneca Collapse?

The Soft Belly of The Oil Industry: an Upcoming Seneca Collapse? 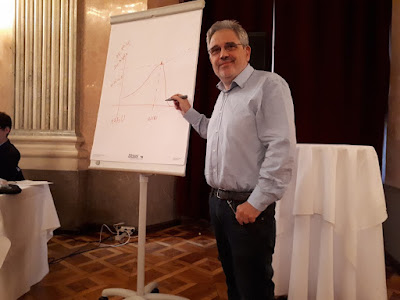 Ugo Bardi explains his idea of an impending “Seneca Collapse” of the world’s oil industry at the session on climate change of the meeting of the Club of Rome in Vienna, on 10 Nov 2017. What follows are not the exact words said, but a text which maintains the gist of this brief comment. It was focused on the concept that the oil industry has a “soft belly” in the fact that it produces mainly fuel for engines used for transportation. If this market were reduced by the introduction of electric vehicles and other transportation innovations, the whole industry could collapse. That would be a good thing for the earth’s ecosystem and for humankind in general.
Dear colleagues, we are having an interesting discussion on how to stop climate change and I think I could add some thoughts of mine on the basis of my recent work that I published in the form of the book titled “The Seneca Effect“. 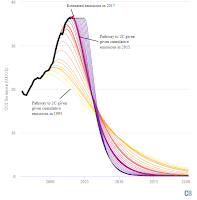 The problem we have been discussing is how to limit emissions and we saw that it needs to be done fast and even drastically if we want to avoid the worse effects of climate change. Obviously, it is not easy. (image from Skeptical Science)
Most of what has been said today was based on a “top-down” approach, which I may also describe as supply-limiting. That is, we are speaking of a carbon tax, of emission limits, and the like; measures that governments should take in order to limit the production of fossil fuels. I don’t have to tell you that it is an effort that has been ongoing for several years and yet emissions keep growing. It doesn’t seem to work
So,  can we take the opposite approach? That is, look at the demand side in a “bottom-up” approach?

Donald Trump and the collapse of the Western Empire

Donald Trump and the collapse of the Western Empire 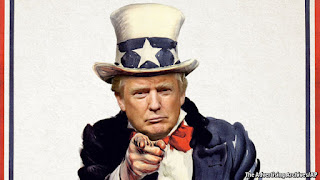 In this post, I argue that the ascent of Donald Trump in the US presidential race is a symptom of the ongoing breakdown of society, in turn caused by the loss of control generated by resource depletion. At the bottom of this post, you’ll find a simple system dynamics model describing the situation and generating another example of “Seneca Collapse”

Donald Trump seems to have taken everyone by surprise. Whether or not he gains the Republican nomination, and whether or not he becomes president, he took the media by storm: people writing on blogs and newspapers are reeling from the impact, asking themselves: where the heck did this come from? What is he? A God? The reincarnation of Hitler? Or of Mussolini? The devil? Or what? Personally, I don’t claim to have been less surprised than most by Trump but, rethinking about the situation, I think it is reasonable to say that something like Trump was unavoidable. He is, really, best defined as the visible effect of the ongoing social phase transition. A discrete change in our path in the direction of collapse.

For a good number of years, I have been studying the reasons for the collapse of societies. And, at the beginning, I tended to explain it as mainly the result of the depletion of crucial resources; crude oil, in our case. But, the more I think about that, the more I understand that the relation between depletion and collapse is far from being straightforward.  A society can very well collapse without running out of anything; think of the case of the Soviet Union. When it collapsed, the Union had still plenty of mineral resources, but it couldn’t find a way to exploit them in a convenient manner.
…click on the above link to read the rest of the article…