The Ugly Truth About Renewable Power

The Ugly Truth About Renewable Power

When Texas literally froze this February, some blamed the blackouts that left millions of Texans in the dark on the wind turbines. Others blamed them on the gas-fired power plants.

The truth isn’t so politically simple. In truth, both wind turbines and gas plants froze because of the abnormal weather.

And when Warren Buffet’s Berkshire Hathaway said it had plans for additional generation capacity in Texas, it wasn’t talking about wind turbines. It was talking about more gas-fired power plants—ten more gigawatts of them.

While the Texas Freeze hogged headlines in the United States, across the Atlantic, the only European country producing any electricity from solar farms was teeny tiny Slovenia. And that’s not because Europe doesn’t have any solar capacity—on the contrary, it has a substantial amount. But Europe had a brutal winter with lots of snow and clouds. Despite the often-referenced fact that solar panels operate better in cooler weather, sub-zero temperatures are far more drastic than cool. This is not even to mention the cloud cover that, based on the Electricity Map data above, did not help.

If we go back a few more months, there were the California rolling blackouts of August that state officials and others insisted had nothing to do with the state’s substantial reliance on solar and wind power. The state’s own utilities commission disagrees.

This is what the California Public Utilities Commission and the state’s grid operator, CAISO, said in a joint letter to Governor Newsom following the blackouts:

“On August 15, the CAISO experienced similar [to August 14] supply conditions, as well as significant swings in wind resource output when evening demand was increasing. Wind resources first quickly increased output during the 4:00 pm hour (approximately 1,000 MW), then decreased rapidly the next hour…

Electricity Has Been in a Slump for 14 Years, But All Heck Has Broken Loose in How it’s Generated

Electricity generating capacity additions & retirements in 2021, and the long-term change in the power mix.

In 2021, developers and power plant owners plan to bring 39.7 gigawatts (GW) of new electricity generating capacity on line, and retire 9.1 GW in generating capacity, for a net increase in capacity of 30.6 GW, according to the EIA today. 70% of the capacity additions will be from wind and solar, 16% will be from natural gas, and 3% will be from a nuclear reactor. These are utility-scale power generators and exclude rooftop solar. Of the retirements, 86% will be coal and nuclear.

Electricity generation in the US has been a no-growth business since 2006, as efficiencies in electrical equipment (LED lights, appliances, air conditioning, etc.) and further offshoring of manufacturing have kept consumption roughly stable despite growth in the economy and population. But where all heck has broken loose is in how this power is being generated (data via the EIA). 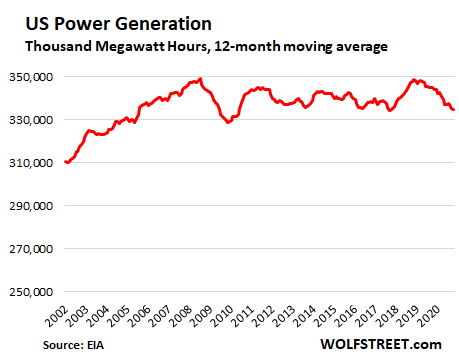 Coal-fired power generation has collapsed by over 60% in 12 years, from around 169 GW hours per month on average in 2008 to 65 GW hours per month on average over the past 12 months, according to data from the EIA. It went from “King Coal” by a wide margin in 2008 (black line in the chart below) to #3, after surging natural gas-fired power generation (green line) blew by it in 2015 as the US has become the largest NG producer in world. And toward the end of 2020, coal fell even below nuclear power (brown line).

In a few years, wind and solar combined (red line) will blow by coal as well. With wind and solar, the big enticement for power generators is that the “fuel” is free and that there won’t be any “fuel” price increases in the future, no matter what inflation will do: 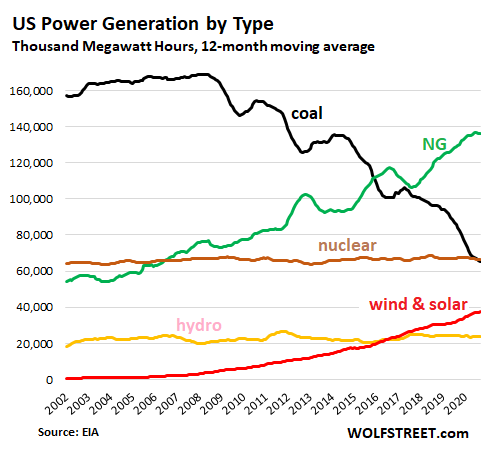 Renewable energy continues to outperform and outmuscle traditional sources of energy in the majority of countries across the globe. Renewables are now the cheapest power technology for new electricity generation across two-thirds of the world.  This is the startling finding of a new study from an authoritative agency published earlier this month.

Bloomberg New Energy Finance’s assessment of the global energy picture is more objective that those of the oil and gas companies (like British Petroleum), or even of supposedly non-aligned agencies like the International Energy Agency, which tend to assume that that world will deviate only slowly from a business-as-usual path. On the other hand, BNEF is more concerned with global finance and investment opportunities: it tends to be clear-eyed and much more realistic about what the future holds.

The numbers speak for themselves: solar photovoltaic modules, wind turbines and utility-scale lithium-ion batteries (the essential partner for solar and wind), are set to continue down strong cost-reduction curves of 28%, 14% and 18% respectively for each doubling in global installed capacity. This irresistible market pressure means that by 2030, the energy generated or stored and dispatched by this triumvirate of transformative technologies will undercut electricity generated by existing coal and gas plants almost everywhere.

In the BNEF scenario, the electrification of the major economic sectors substantially drives up the global demand for electricity.  But this power is not generated by carbon-based fuels. The world changes from two-thirds fossil fuels in 2018 to two-thirds zero carbon energy by 2050. For wind and solar this is 50-by-50: supplying 50% of the worlds electricity by 2050–effectively ending the era of fossil-fuel dominance in the power sector.

The National Infrastructure Commission’s plan for a renewable UK

The National Infrastructure Commission’s plan for a renewable UK

The National Infrastructure Commission (NIC) was launched by then-chancellor George Osborne in October 2015 to “think dispassionately and independently about Britain’s long-term infrastructure needs in areas like transport, energy, communication, flood defence and the like.” Well, the NIC has now thought dispassionately and independently about energy and has concluded that the UK can meet its 2050 decarbonization goals with either a mostly nuclear or mostly renewable generation mix, but that “wind and solar could deliver the same generating capacity as nuclear for the same price, and would be a better choice because there was less risk”. Here we take a brief look at this renewables-beats-nuclear option to see whether it might work.

The NIC study was brought to my attention in a comment by correspondent Ed T in Blowout Week 236, so a hat tip to Ed T. The data available to me consisted of the NIC report, NIC’s Power Point presentation, the source of most of the data I use, and a summary article from the Guardian. The power sector modeling work was performed by Aurora Energy Research (Aurora).

The NIC “aims to be the UK’s most credible, forward-thinking and influential voice on infrastructure policy and strategy, producing reports and analysis of the highest quality, written in plain English, independent of government and all vested interests, and making clear recommendations based on rigorous evidence; and developing an evidence base which sets a gold standard in its quality and breadth.” Its conclusions are summarized in the Guardian article:

Government advisers have told ministers to back only a single new nuclear power station after Hinkley Point C in the next few years, because renewable energy sources could prove a safer investment. Sir John Armitt, the NIC’s chairman, said: He argued that wind and solar could deliver the same generating capacity as nuclear for the same price, and would be a better choice because there was less risk.