Just one month after conducting joint military exercises, Russia and China are set to sign an agreement which would boost the use of their national currencies in bilateral and international trade in an attempt to mmove away from the current dollar-denominated financial system, according to Russian state-owned news outlet TASS.

The Kremlin released a draft decree on Wednesday outlining “settlements and payments for goods, service and direct investments between economic entities of the Russian Federation and the People’s Republic of China are made in accordance with the international practice and the legislation of the sides’ states with the use of foreign currency, the Russian currency (rubles) and the Chinese currency (yuan).”

According to the draft, Moscow and Beijing will cooperate to develop a national payments system, along with cross-border payments in national and other currencies.

“The sides deepen the cooperation in the field of national payment card systems and within the framework of the Russian and Chinese legislation provide support to commercial banks in their independent decision-making on joining the payment system in the state of the other side,” reads the document.

Sino-Russian interdependence will be based on oil 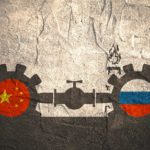 Although Beijing is Moscow’s largest trading partner, while Russia only ranks in the second ten among China’s importers, the Kremlin is strategically the most important contractor because it supplies the most desirable product – oil – and Chinese demand for this raw material is growing. It appears that an increase in Russian oil exports to China will be at the expense of European consumers.

Chinese oil production has been falling since 2015, and yet enormous infrastructure investments and huge strategic petroleum reserves (SPR) boost the demand for it. No wonder then that in 2017, Beijing became the largest importer of crude oil, overtaking the United States. Currently, China’s consumption of product is approaching 13 million barrels per day. In the March Gefira we predicted that the PRC will have become the largest consumer of this raw material by 2025, accounting for 18-20% of the global consumption.1)And Russia has an important role to play because already in 2016 it became China’s most important oil supplier, replacing Saudi Arabia.

China has been buying more and more Russian oil in the last decade, even though the Kremlin does not increase its export volume, which is around 5 million barrels per day. In 2009, countries such as Poland and the Netherlands imported more Russian crude oil than Beijing, but in 2015 they were overtaken by China, which in 2017 had an over 20% share in the Russian exports of this raw material.

In recent years, an increase in the Sino-Russian trade balance has been noticeable. While a decade ago, the total turnover was less than 45 billion USD, in the last year this result was almost twice as high: 84 billion USD. During the November meeting of the prime ministers of both countries, it was announced that the target would be to reach the level of 200 billion USD, with the energy industry, mainly oil and gas, being the main factor in the balance sheet growth.2) Everywhere we look the influence of the Chinese government and their totalitarian surveillance methods can be seen.

Go ahead and search “China surveillance” (Pro-tip: Use DuckDuckGo or an alternative search engine!) and watch how many articles pop up regarding the growing digital dystopia being finalized across the People’s Republic of China. Titles like, Smart ID cards and facial recognition: How China spreads surveillance tech around the world and China’s new surveillance state, everyone will be watched, reviewed and rated really warm the heart and fill the head with a vision of a society where no thought is private, criticism of the State is illegal, and your social behaviors affect your place in life.

This is the current state of much of China. And it’s coming to a neighborhood near you.

Case in point, Reuters recently reported that Chinese telecom giant ZTE Corp is developing a “Smart Card” for Venezuela to help track citizens every move. The Venezuelan government sent a group to China to learn how to build their own surveillance state. Reuters reports:

‘What we saw in China changed everything,’ said the member of the Venezuelan delegation, technical advisor Anthony Daquin. His initial amazement, he said, gradually turned to fear that such a system could lead to abuses of privacy by Venezuela’s government. ‘They were looking to have citizen control.’

The following year, when he raised concerns with Venezuelan officials, Daquin told Reuters, he was detained, beaten and extorted by intelligence agents. They knocked several teeth out with a handgun and accused him of treasonous behavior, Daquin said, prompting him to flee the country. Government spokespeople had no comment on Daquin’s account.

The following is adapted from LikeWar by P. W. Singer and Emerson T. Brooking, a book by two defense experts—one of which is the founder of the Eastern Arsenal blog at Popular Science —about how the Internet has become a new kind of battleground, following a new set of rules that we all need to learn.

“Across the Great Wall we can reach every corner in the world.”

So read the first email ever sent from the People’s Republic of China, zipping 4,500 miles from Beijing to Berlin. The year was 1987. Chinese scientists celebrated as their ancient nation officially joined the new global internet.  As the Internet evolved from a place for scientists to a place for all netizens, its use in China gradually grew—then exploded. In 1996, there were just 40,000 people online in China; by 1999, there were 4 million. In 2008, China passed the United States in number of active internet users: 253 million. Today, that figure has tripled again to nearly 800 million (over a quarter of all the world’s people online).

It was also clear from the beginning that for the citizens of the People’s Republic of China, the internet would not be—could not be —the freewheeling, crypto-libertarian paradise pitched by its American inventors. The country’s modern history is defined by two critical periods: a century’s worth of embarrassment, invasion, and exploitation by outside nations, and a subsequent series of revolutions that unleashed a blend of communism and Chinese nationalism.