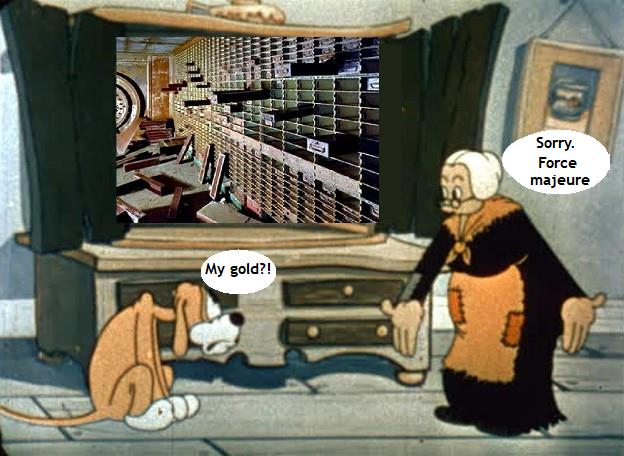 “It appears that there is a dwindling and overleveraged supply heading towards an unmanageable and relentless source of demand.”

It is interesting to watch the ongoing management of physical gold holdings in the West.

Physical gold has been seeing large drawdowns from inventory during this price decline, but silver does not.

This is not due to some preference or matter of taste.   Physical gold for sale at these prices is in short supply, whereas silver is not.

Both are subject to speculative price manipulation in the paper markets.

The relentless demand from Asia is stressing the highly leveraged claims per physical ounce of gold in London and New York.

It appears that there is a dwindling and overleveraged supply heading towards an unmanageable and relentless source of demand.

The system will be maintained— until it cannot.   Although the game can be extended by a determined effort, no commodity pricing pool can last forever in the face of a stubbornly stable supply and a steady excess of offtake out of the pool, shenanigans and antics notwithstanding.

Physical gold is flowing from West to East, into the markets and strong hands of Asia.

The eventual resolution may be quite energetic in terms of price.

Technocrats Rule: Democracy Is OK as Long as the People Rubberstamp Our Leadership

Technocrats Rule: Democracy Is OK as Long as the People Rubberstamp Our Leadership

We are in a very peculiar ideological and political place in which Democracy (oh sainted Democracy) is a very good thing, unless the voters reject the technocrat class’s leadership. Then the velvet gloves come off. From the perspective of the elites and their technocrat apparatchiks, elections have only one purpose: to rubberstamp their leadership.

As a general rule, this is easily managed by spending hundreds of millions of dollars on advertising and bribes to the cartels and insider fiefdoms who pony up most of the cash.

This is why incumbents win the vast majority of elections. Once in power, they issue the bribes and payoffs needed to guarantee funding next election cycle.

The occasional incumbent who is voted out of office made one of two mistakes:

1. He/she showed a very troubling bit of independence from the technocrat status quo, so a more orthodox candidate is selected to eliminate him/her.

2. The incumbent forgot to put on a charade of “listening to my constituency” etc.

If restive voters can’t be bamboozled into passively supporting the technocrat status quo with the usual propaganda, divide and conquer is the preferred strategy. Only voting for the technocrat class (of any party, it doesn’t really matter) will save us from the evil Other: Deplorables, socialists, commies, fascists, etc.

In extreme cases where the masses confound the status quo by voting against the technocrat class (i.e. against globalization, financialization, Empire), then the elites/technocrats will punish them with austerity or a managed recession.The technocrat’s core ideology boils down to this:

World War III Will Be An Economic War

World War III Will Be An Economic War

There is a mass delusion in the mainstream created I think in large part by too much exposure to movie fantasy and TV fiction. It is an immediate assumption; one that I believe is far more dangerous than many people give it credit for. The assumption is that the next great war, should it occur, will inevitably be a nuclear one, and the doom surrounding it will end everything as we know it. Many people even get excited at the idea of World War III and the notion that it will “wipe the slate clean,” setting the stage for a positive human reformation from the ashes. I’m here to say that this is likely not how things will play out.

There are much more precise and effective weapons than nukes in the arsenal of the establishment globalists that manipulate political systems in various nations.

For example, the use of weaponized economics and false paradigms. As I have warned for years now, a conflict between East and West has been engineered to take place, and this conflict will primarily be an economic one. I outlined this dynamic in October 2016 in my article East vs. West Division Is About The Dollar — Not Nuclear War.

The excitement and dread surrounding potential nuclear warfare distracts from the much more legitimate threat of a staged financial war between East and West (as well as regional wars by proxy in Syria and North Korea which could bog the US down in a mire). It is important to remember that all wars are invariably banker wars — that is to say, almost all wars benefit international financiers by creating an environment ripe for centralization of wealth and political power. This notion tends to confuse some analysts and activists in the liberty movement.

Gold In Uncertain Times: “The West Doesn’t Get It… They’ve Been Indoctrinated By Paper Money”

Gold In Uncertain Times: “The West Doesn’t Get It… They’ve Been Indoctrinated By Paper Money”

In this fascinating interview on RealVision TV, Grant Williams and Egon von Greyerz cover a very broad range of subjects from gold, wealth preservation to debt, interest rates, Brexit, the EU and much more.

The interview was recorded in London at the end of 2016 but the discussion is timeless and extremely relevant in regard to future events and risks.

The biggest risks ahead according to Egon is the global bond markets. He predicts rates going to very much higher levels like in the 1970s. That will lead to more money printing, faster currency debasement and the demise of the bond market.

Grant and Egon also discuss that in every period of panic and crisis combined with economic mismanagement, which we are seeing today, gold has always acted as insurance. The setup is now perfect for gold to act to protect wealth against the coming problems in financial markets and the world economy…”the Indians know this, the Chinese know this but the West doesn’t understand because they have been indoctrinated by paper money…”

As inflation rises institutions will be obliged to hold gold as a hedge. Since gold production is coming down substantially over the next 8 years there will be less gold available. No one will trust paper gold. This will lead to major upward pressure in the price of physical gold. Future increases in demand can only be satisfied at much higher prices.

Full interview below: One of the most respected names in the gold market, Egon von Greyerz illuminates the discussion on the long term trend for the precious metal, against the current climate.

East vs. West Division Is About The Dollar – Not Nuclear War

East vs. West Division Is About The Dollar – Not Nuclear War

The interesting thing about working in alternative economics is that inevitably you will become the designated buzzkill. You may be presenting the facts on the ground and the reality behind the numbers, but most of what you have to report will not be pleasant. Alternative economists are doomed to be labeled “doom and gloomers.” And that’s okay…

The truth is what it is, and sometimes it hurts people obsessed with undue positivism and bull market naivety. However, as bad as we seem to be when it comes to a negative outlook, we do not necessarily present the most ugly options on the table.

There is an undeniable trend by some within the liberty movement to assume a Mad Max-style end game to our ever expanding house of cards. That is to say, they see the only plausible outcome being apocalyptic in nature, and nuclear holocaust fits well within this viewpoint. In many cases, the argument is sometimes presented that WWIII is in the best interests of global elites seeking a catalyst for their so-called “new world order.”

This is not to say that I don’t think WWIII is a possibility; it certainly is.  But I remain rather skeptical of the usefulness of nuclear war for the elites. Primarily because everything they openly claim they hope to accomplish can be accomplished without nukes.

The narrative of a coming conflict between the East and the West has been boiling steadily as the U.S. election nears its end. Even the mainstream media is insinuating the potential for shots fired. Some believe the results of the election will determine the odds of war. I hold a different position.

For five thousand years, gold and silver have been humanity’s premier form of money; real money, not the faux-money manufactured by our central banks. During that same period of time, these metals have been our premier instruments of wealth preservation and therefore our “safe havens.”

If diamonds were as common as pebbles, it would be impossible to impress one’s potential bride-to-be with such stones, even in a setting of gold. Diamonds have their value, both real and sentimental, not only because of their aesthetic qualities but also because of their perceived scarcity.

The situation is the same for gold and silver. If gold and silver were as common as iron, zinc, or even copper, they would not be coveted as greatly, regardless of their aesthetic appeal, because of their abundance. It is the qualities of being “rare” and “precious” which are essential in order for any commodity to be considered a suitable currency. It is these properties that make a commodity a source of value. There will always be demand for these metals; therefore, they will always have value. For these reasons, gold and silver preserve and protect wealth.

Gold and silver are both precious and rare, but they are more than that. As metals, they also exhibit uniformity. Once refined, any gold or silver coin is indistinguishable from any other. Conversely, diamonds lack uniformity, therefore they are not a good candidate to be used as “money.”

Where Is All The Gold Going?

Where Is All The Gold Going?

With the help of a set of excellent charts on gold imports vs exports by Nick Laird (www.sharelynx.com), I would like to give you a brief overview of where gold is going. We have heard for some time that gold is moving to the Far East but is it really only moving there?

Official gold reserves held by central banks – in the official sector, there has certainly been a noticeable shift, with emerging market central banks increasing their buying to such an extent that total central bank holdings have been rising since 2008, for the first time since the mid 1960s – click to enlarge.

Well if we start with the US, it certainly is going out. In the first chart, we can observe that gold has been leaving the US without exception at least since 1996. Even at the top of the gold bull market when the price crossed briefly $1,900, gold exports exceeded gold imports for the US. However, according to Nick Laird, if one adds US gold mine production to this, it puts the US in a net neutral position. So US imports plus production equals exports; this has been the case over the last 18 years.

US gold exports and imports – adding back annual production reduces the difference roughly to zero – click to enlarge.

Is the same the case for Europe? Contrary to what one might think, while gold is moving from West to East, some of it is not going all the way to India and China but rather stays in Europe. I have always made a distinction between North America (US and Canada) and Europe. In the next chart below, it can be seen that European central banks have stopped selling gold in 2008, which corresponds with the financial crisis that almost brought down the international financial system.