“Out Of Control” Canada Wildfire Could Double In Size Today: Fort McKay Evacuated

“Out Of Control” Canada Wildfire Could Double In Size Today: Fort McKay Evacuated

Since we first reported on the massive fire (and the fallout) that was burning in Canada’s oil sands gateway, Fort McMurray, things have gone from bad to worse. Today we learn that the fire that has already devastated 600 square miles, growing an additional 50% in less than 24 hours, is out of control, and could double in size by the end of the day.

As of late Saturday night, the fire had grown to 156,000 hectares and was heading toward the Saskatchewan border. Officials said winds up to 40 kilometres an hour will blow Saturday and warm temperatures mean it could add another 100,000 hectares to the fire by the end of the day. “We need heavy rain,” said Chad Morrison, senior wildfire manager, giving an update with Notley at noon Saturday according to the EdJournal.

“This remains a big, out of control, dangerous fire” Public Safety Minister Ralph Goodale said. “There is one prediction, that if it continues to grow a the present pace, it could double today” Goodale added.

The map above shows the fire as of 11 a.m. Saturday. The smaller fire in the northeast corner of the map is expected to join the major fire today and continue growing. There are serious concerns it will reach the Saskatchewan border

Alberta’s government crisis cell warned that the fire conditions remained extreme in the province due to low humidity, high temperatures, and gusty winds.

“It looks like the weather in and around Fort McMurray will still be, sadly, very conducive to serious burning conditions. The situation remains unpredictable and dangerous.” Goodale continued.

People that fled to the north of the city are now being evacuated again due to changing wind conditions. The plan now is to move people south to other evacuee staging grounds, and eventually to Edmonton, 250 miles to the south.

Many evacuees forced from their Fort McMurray homes by wildfire Tuesday are on the move once again.

Three communities south of Fort McMurray, one including an evacuation centre, were ordered to leave as changing weather patterns turned the wildfire their way late Wednesday evening.

A red glow from the encroaching fire can be seen ominously framing the Anzac evacuation centre as people board buses. For Donna Guillamot, evacuated yesterday from Fort McMurray, the feeling is all too familiar.

“I thought it was safe here, so I guess we’ll go to Edmonton,” said Guillamot. “It’s very stressful, you don’t know what’s burned, what’s not burned, when you can go back.” 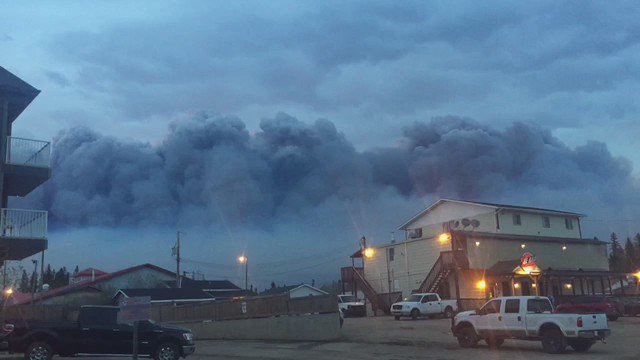 Buses took people to Edmonton and officials hope to have everyone out by midnight. Dale Bendfeld, the acting director of community services and policing for Wood Buffalo, says safety, as always, is paramount.

“As you can see looking up there this is a very large and very serious fire we’re working with,” said Benfeld.

“It’s already taken on a city, we’re going to ensure that people of Anzac and Gregoire are safe and get them down to Edmonton and out of here.” 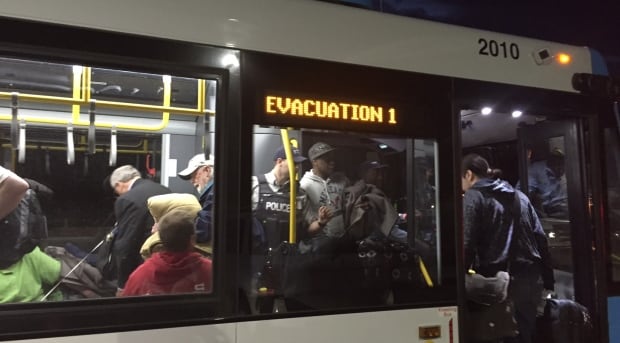 Evacuees board a bus preparing to leave Anzac. (Cameron MacIntosh)

The regional emergency operations centre (REOC) which had just relocated to Anzac from the Fort McMurray airport will be moving south to Lac La Biche.

Residents of neighborhoods in the Canadian boomtown of Fort McMurray – considered the gateway to Alberta’s oil sands as the Athabasca oil sands are roughly centered around the town – are under mandatory evacuation as a massive wildfire has jumped across Highway 63 and entered the city limits.  Homes have begun to burn in Fort McMurray as residents flee for safety from a blaze that’s doubled in size within a day.  More than 30,000 people have now been ordered to evacuate Fort McMurray communities.

The fire has already destroyed homes on the outskirts of the municipality. Bernie Schmitte, wildfire manager at Alberta Agriculture and Forestry said that the fire made a “major run” during the night and reached the Athabasca River. All Air Canada and WestJet flights to and from Fort McMurray have been cancelled

“My whole life is burning away,” Jenn Tremblett, who has left for Edmonton, told Metronews. “My home is in Gregoire (Fort McMurray neighbourhood) so it may be gone soon. “My family is trying to get out of town.” Tremblett said the community of Beacon Hill is on fire, after a nearby Shell gas station blew up.

Shock Videos from California: Wildfire Evacuation as a Small Town Burns to the Ground

Shock Videos from California: Wildfire Evacuation as a Small Town Burns to the Ground However prepared you think you are for an emergency wildfire evacuation, when it looks like you’re driving through the outer edges of Hell, it’s going to be a scary ride.

Wildfires are a real threat every year in California, but this season seems to be especially dramatic and uncontrollable. Chalk it up to the severe drought that has caused the grass and trees to become well-seasoned fuel for the fires. One particular fire rages out of control in Lake County, just north of the famous Napa Valley, putting thousands of acres of vineyards on the outskirts of the inferno.

That is far from the worst of it, though. Over the weekend, the tiny burg of Middletown, California was burned off the map.  The flames moved so quickly that there was barely time to notify the families of the town that they had to evacuate.

When the fire hit the gas stations on the edge of town, the fuel tanks exploded, worsening the blaze. The fire traveled to the down and destroyed virtually every single building More than 1000 homes and businesses burned to the ground. Pay close attention at 1:30.

Residents literally only had minutes to evacuate as the flames approached. This was not a calm, orderly evacuation. This was families fleeing for their lives.

Do you think you are prepped to evacuate? What if you had to literally drive through a wildfire? Here’s a dose of reality. This video was shot as one family left their home for what is most likely the last time. (Some very understandable harsh language).

I know what you’re thinking: That guy waited way too long to bug out.

The thing is, this fire moved so incredibly quickly that people who bugged out within minutes of notification had a scene exactly like this. They had a soundtrack of approaching flames roaring in their ears. One minute, the fire was a plume of smoke on the horizon, and the next minute it was in their backyards. Cal Fire says the Valley Fire in Lake County has grown to over 25,000 acres burning homes, shutting down parts of Highway 29 and forcing the evacuation of thousands of people from of nearby towns.

Cal Fire says the Valley Fire in Lake County has grown to over 25,000 acres burning homes, shutting down parts of Highway 29 and forcing the evacuation of nearby towns and more than 3,000 people. Will This Be Remembered as The Summer North Americans Woke Up to Climate Change?

Will This Be Remembered as The Summer North Americans Woke Up to Climate Change?

Smokey haze, intense heat, encampments of evacuated residents next to the highway: these were the conditions that greeted Renee Lertzman when she recently drove through Oregon. It’s no wonder why the environmental psychology researcher and professor resorts to the term “apocalyptic” to describe the scene.

“It was a surreal experience,” says Lertzman, who teaches at the University of San Francisco and Victoria’s Royal Roads University. “We’re all driving along and it’s so smoky and it’s terrifying. Yet we’re all doing our summer vacation thing. I couldn’t help but wonder: what is going on, how are people feeling and talking about this?”

It’s really the question of the hour. Catastrophic wildfires and droughts have engulfed much of the continent, with thousands displaced from their homes; air quality alerts confine many of the lucky remainder behind locked doors (with exercise minimized and fresh-air intakes closed).

Firefighters have been summoned from around the world to battle the unprecedented fires, which are undoubtedly exacerbated by climate change. Yet the seemingly reasonable assumption that witnessing such horrific natural disasters may increase support for action on climate change is vastly overestimated, Lertzman tells DeSmog Canada.

“I think it’s a fantasy that the worse things get and the more intense the effects are … that will magically translate into a public and political recognition and engagement and getting on board,” she says. “There’s an abundance of evidence that’s not the case and that humans have enormous capacity to avoid and deny reality and what’s staring us right in the face.”

Humans’ tendency toward denial and avoidance is incredibly complex and entrenched.

Robert Gifford, professor of psychology and environmental studies at University of Victoria, has charted 34 (previously 29) ‘dragons of inaction,’ which prevent people from responding to evidence of climate change, ranging from a naive belief in “technosalvation,” to lack of attachment to geographic place, to straight-up denial.