However, Saudi Arabia, showing heightened sensitivity into what it perceives as foreign intrusion into its own affairs, upped the ante even more, by saying it would freeze “all new business” between the kingdom and Canada and also in an admittedly knee-jerk response, recalled thousands of Saudi students attending Canadian universities, a move to hurt Canada financially.

Omar Allam, a former Canadian diplomat and head of Allam Advisory Group, said the recall of 12,000 to 15,000 Saudi students from Canada, and accompanying relatives, is going to remove as much as CAD$2 billion in annual investment in the Canadian economy.

“Any further step from the Canadian side in that direction will be considered as acknowledgment of our right to interfere in the Canadian domestic affairs,” the Saudi Foreign Ministry said. “Canada and all other nations need to know that they can’t claim to be more concerned than the kingdom over its own citizens.”

Canada, however, sees the situation differently. “Canada will always stand up for the protection of human rights, very much including women’s rights, and freedom of expression around the world,” Marie-Pier Baril, a spokeswoman for Canadian Foreign Minister Chrystia Freeland said in a statement. “Our government will never hesitate to promote these values and believes that this dialogue is critical to international diplomacy.

It’s becoming painfully clear that the way forward for global oil markets is going to be bumpy, very bumpy, particularly as we head into next year. Much of this uncertainty, even blame, is being increasingly leveled at a person that has surprised, flabbergasted and even shocked political opponents, allies and adversaries alike since he took office – President Donald Trump.

A growing line of thought surmises that while Trump uses the presidential bully pulpit, in this case Twitter, to put pressure on long-time ally and de facto OPEC leader Saudi Arabia to get ready to pump more oil to keep (both oil and gas) prices from spiraling out of control, much of the blame for higher prices actually belong to Trump.

The argument makes perfect sense. If Trump would ease back on both his heated rhetoric toward Iran, though that case could be made over much of Trump’s dealings with China, the EU, Canada and others, and if Trump would revisit his decision on re-imposing sanctions on Iran, then oil markets would benefit. Why? A softer line on Iran would reduce the worry or even fear that a loss of some 2.7 million barrels per day (bpd) of Iranian crude would roil oil markets so much that the Saudis would have to pump an unprecedented amount of oil, perhaps as much as 12.5 million bpd, eating up all of its spare capacity.

The Saudi’s have never pumped more than around 10.7 million bpd of oil, a level reached in June, and has for more than 50 years kept at least 1.5-2 million bpd of spare capacity for oil market management.

ExxonMobil is also stepping up exploration off the coast of Victoria and considering developing a gas field called West Barracouta close to an existing field, the oil major also said in an emailed statement on Monday.

“Combined with the existing Gippsland resource and infrastructure, an LNG import facility could ensure ExxonMobil can continue to meet our customers’ needs,” the company said, adding that the facility could become operational by around 2022.

Looming gas shortage Down Under

This disclosure comes as Australia struggles with a natural gas shortage, a unique phenomenon for the gas exporting giant. Late last year, the Australian Competition & Consumer Commission and the Australian Energy Market Operator said that gas shortfalls in the country for 2018 and 2019 would be much worse than originally forecasted. They both predicted a shortfall of nearly 110 petajoules of gas in 2018 and similar in 2019, which represents about one-sixth of the projected amount of gas demand in Australia.

In light of this growing problem, late last year Canberra threated to put gas export regulations in place, but the idea has been put on hold as the government and suppliers work out a deal.

However, upping the ante even more, Australia’s energy market operator warned in March that Victoria, the country’s biggest gas consuming state, could face shortages from mid-2021 due to a rapid drop in supply from the Gippsland Basin Joint Venture, owned by ExxonMobil and BHP Billiton, Reuters said in a report. Related: The Fed Is Driving Down Oil Prices

Is Russia Bailing On The OPEC Deal?

Is Russia Bailing On The OPEC Deal?

For the first week of June, Russia, the world’s largest oil producer, exceeded the amount it agreed to produce as part of the January 2017, OPEC/non-OPEC supply cut deal.

For the first week of June, Russia produced some 11.1 million barrels per day (bpd), far exceeding production limits outlined in the deal, Interfax news agency said on Saturday, citing a source familiar with the matter.

As part of the oil production cut, Russia agreed to trim its production by 300,000 bpd from 11.247 million bpd. The output cut deal called for its members to remove some 1.8 million bpd of oil from global markets.

That deal was orchestrated to stop the bloodletting in global oil markets at the time due to a ramp up in U.S. shale production and Saudi Arabia’s late 2014 strategy of trying to drive U.S. shale producers out of business by opening the production flood gates and sending prices to multi-year lows.

However, the Saudi’s plan backfired. Global oil prices tumbled from more than $100 per barrel in mid-2014 to under $30 per barrel by the start of January 2016, throwing global markets into a historic supply overhang, and causing financial chaos for the Saudis who had to start issuing international bonds to offset record budget deficits – a development that is still ongoing as the Kingdom shores up its finances from that low oil price period.

Now that OECD oil inventory levels have reached the OPEC/non-OPEC members’ goal of five-year averages, there is talk and speculation among not only media but oil producing countries asking if it’s time to ramp up production. Also, geopolitical factors are coming into play as renewed U.S. sanctions against Iran will remove as many as 500,000 bpd from global markets, perhaps more according to other forecasts. In addition, OPEC member Venezuela’s oil production is coming apart at the seams, also removing more barrels from the market.

China has become the world’s largest oil importer, and despite establishing the largely successful yuan-denominated oil futures, Beijing will have to grapple with an overlooked geopolitical and economic consequence as it seeks to quench its thirst for oil and gas.

As China relies more on both foreign crude oil imports and imported gas in the form of LNG and piped gas from neighboring countries, the outflow of petro-dollars or in this case petro-yuan will see the country contend with the decades-long dilemma that the U.S. faced; a massive transfer of capital to foreign oil producers.

Worse yet, for the U.S. at the time of its foreign oil import dependence, the transfer of funds was often to less-than-friendly Middle Eastern oil producers, including Saudi Arabia who in the 1970s and 80s could arguably have been called a quasi-friend or at least an ally of convenience. The U.S. needed Saudi oil as American oil production continued to decline while U.S. oil consumption spiked to unprecedented levels. For their part, the Saudis needed, and still do, the U.S. Navy’s 5th to keep open vital shipping lanes including the world’s most important maritime chokepoint, the Strait of Hormuz, to allow the export of massive cargoes of crude to foreign markets.

While it’s no secret that China has been intensifying its building frenzy, including military installations on islands, reefs and inlets in the heavily disputed South China Sea, it is also becoming increasingly clear that Beijing is not afraid to draw a line in the sand over these mostly dubious claims.

“Beijing’s resolve to protect the peace and the stability of the South China Sea cannot be shaken,” Wang said, adding that the problems in the region are due to “foreign forces” which “have sent fully armed warships and fighters to the South China Sea to flaunt their military might.”

His reference to so-called foreign forces include increased freedom of navigation voyages by the U.S. Navy in the South China Sea, which is for all intent and purposes, an U.N.-mandated international waterway. Lately, Australia and even the U.K. have started to challenge Beijing’s claims in the troubled water way. China, which has over-lapping territorial claims in the South China Sea with the Philippines, Vietnam, Taiwan, Malaysia and Brunei, claims nearly 90 percent of the sea in what is commonly referred to as its nine-dash line. 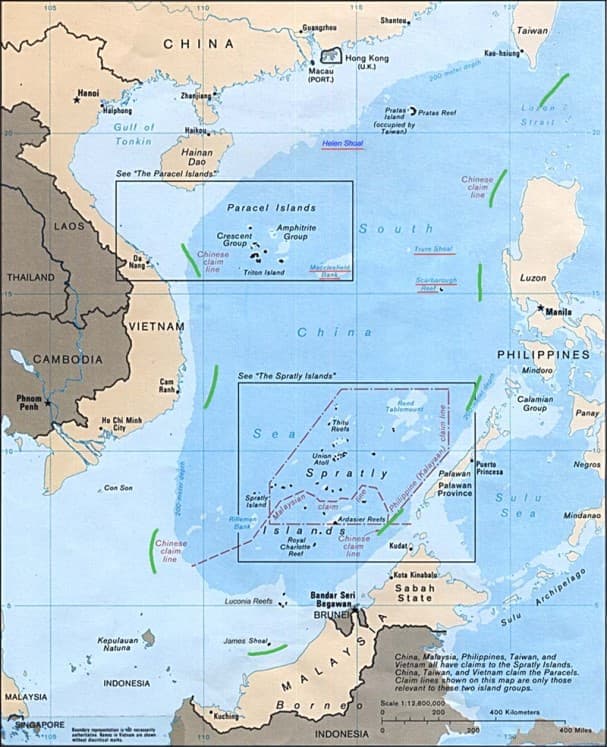 Taking a step back from the constant rhetoric and even at times sabre rattling over the matter, it’s fair to ask why would the world’s newest super power and second largest economy be willing to jeopardize its reputation and standing with not only its neighbors in the Asia-Pacific region, but also its image before an increasingly alarmed and watching international community? The answer, as is often the case in geopolitical power plays, is oil, and likely, plenty of it.

In the increasingly topsy-turvy world of liquefied natural gas (LNG) markets, the world’s largest LNG importer could soon be exporting the super-cooled fuel to the world’s second largest LNG exporter – a situation unimaginable, even laughable just a few years ago.

On Monday, news broke that a Japanese consortium, made up of JERA, the world’s largest private LNG buyer, and Marubeni Corp., were planning to export gas to industrial users on Australia’s eastern coast. There is even a possibility that the Japanese consortium will construct an LNG import terminal in New South Wales (NSW), Australia’s most populous state.

A report three days ago in The Australian Financial Review said that the proposed terminal’s imports could represent up to 75 percent of NSW’s gas demand, while plans to increase the number of gas-fired power stations will increase that demand pull.

How could Japan, for all practicable purposes a hydrocarbon anemic country with scant oil and gas resources, import gas to oil and notably gas rich Australia?

The answer is straight forward: In an effort lock in lucrative prices for LNG in the Asia-Pacific region amid limited supply around the start of the decade, Australia went on an LNG export project development feeding-frenzy. Since the country doesn’t have an energy master plan there was no coordination on these massive CAPEX export projects. Adding insult to injury, budget blowouts and cost overruns since then have been the norm, casting further doubt on the wisdom of Australia having as many as ten major LNG export projects.

As a result, Australia will soon overtake Qatar as the world’s largest LNG exporter, with more than 80 million tons per annum (mtpa) of liquefaction capacity. Qatar, however, and likely for geopolitical reasons as much economic, has vowed to increase its production capacity from 77 mtpa to over 100 mpta in the next five years.