“Households with elevated levels of debt are more vulnerable to increases in interest rates”, the Canada Mortgage and Housing Corporation redundantly observes in its latest bulletin and warns that “with interest rates on the rise, highly indebted households could see their increased required payments exceed their budgets.”

Naturally, this increased debt payment burden usually come at the cost of reduced consumption, decreased savings or opting to make lower repayments on principal amounts. Some households might even default on their loans if their incomes are not sufficient to cover higher expenses and credit charges.

And, as the CMHC ominously warns, if an increasing number of borrowers begin to default on their loans, financial institutions may decrease lending activities in response.

These negative effects could then impact other areas of the economy. Research has shown that recessions in highly indebted countries tend to exhibit a greater loss in output, higher unemployment, and last longer compared to countries with lower debt levels.

Here are some of the latest troubling observations on Canadian household debt levels from the CMHC:

The debt-to-income (DTI) ratio is a measure of the relative vulnerability of indebted households. While households may be able to service their debt during periods of low interest rates, some may face challenges when rates rise. Highly indebted households have usually few debt consolidation options to respond to increasing debt service costs.

Total household debt relative to disposable income has been trending higher as indebtedness has been rising faster than incomes, with mortgage debt being a major contributor, counting for two-thirds of all outstanding household debt in Canada. While the increasing trend in the Canadian DTI ratio has now paused, it remains near a record high, hovering around 170% in Canada and varies significantly among Canada’s metropolitan areas (see chart 1).

For The First Time Ever, Bank Of Canada Buys Mortgage Bonds

For The First Time Ever, Bank Of Canada Buys Mortgage Bonds

Three weeks ago we reported that, the Bank of Canada announced for the first time that in order to prop up the sliding Canadian housing market help increase the tradeable float of its benchmark securities, the central bank would start buying government-backed mortgage bonds, also known as Canada Mortgage Bonds which are guaranteed by Canada Mortgage and Housing Corp.

Well, it took less than a month for the BoC to execute on its intentions, because on Thursday, the central bank purchased Canada Housing Trust bonds for the first time ever, scooping up C$250 million ($187 million) of the federal agency’s C$5.5 billion five-year notes which priced today.

Canada Housing Trust, the special issuer of Canada Mortgage and Housing Corp.-backed debt, priced the 2.55% bonds due 2023 at a spread of 40.5 bps over comparable debt issued by the country’s federal treasury, National Bank Financial, the lead coordinator of the deal, said. The housing agency first offered these notes in September at a relatively narrow spread of only 31.5 basis points.

As we reported at the time, the Bank of Canada said in late November it would broaden the range of high quality assets it acquires to include purchases of government-guaranteed debt issued by federal Crown corporations. While the central bank said the expansion is “only for balance sheet management” and would give it added flexibility to offset the continued growth of bank notes, the cynical skeptics immediately accused the BoC of implicitly stepping in to prop up Canada’s deteriorating housing market. 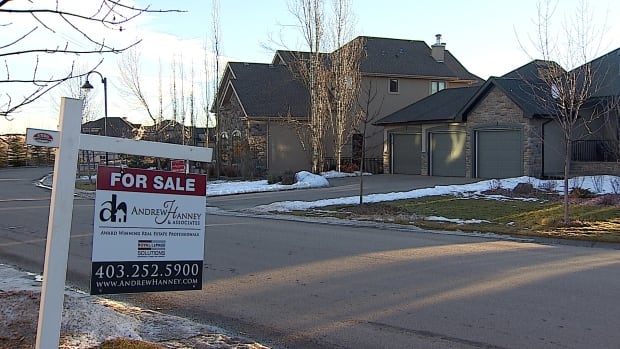 This tiny hamlet south of Calgary has 27 homes for sale for more than $1 million. (Colin Hall/CBC)

One of the big bads from the 1980s is starting to emerge again in Alberta.

Jingle mail — the act of walking away from an underwater mortgage by mailing your keys back to the bank — is a peculiarity of the Alberta residential market and an act of desperation. However, a combination of high debt and lost jobs make it an option in a province going through a significant economic reckoning.

It’s enough of a concern that the federal government is watching the Alberta market closely. Jingle mail, or strategic defaults, weaken the housing market and increase loan losses among Canada’s banks.

‘People saying that we can’t make a go of it and mail the keys to the bank.’– Don Campbell, Real Estate Investment Network

“People saying that we can’t make a go of it and mail the keys to the bank. In the big cities, not so much because the average sale prices haven’t really dropped much, we haven’t seen the pain yet. But Calgary is getting pretty tight.”

Bruce Alger, an insolvency trustee at Grant Thornton in Calgary, said he is dealing with one such case and has heard of more.

“It’s when you see high-end home prices drop 20 per cent below the peak,” said Alger. “I think there are people considering walking away and I’ve talked to one or two myself.”

Why Alberta is different

Alberta is the only Canadian province to broadly offer non-recourse residential mortgages. Those loans with at least a 20 per cent down payment and thus are not insured by the Canada Mortgage and Housing Corporation (CMHC).

The high-rise construction boom in Toronto has been evident for a while. It has been motivated by sky-high prices. In May, prices in Toronto rose another 5% from a year ago. For all types of homes, prices are now 42% higher than at the crazy peak of the prior bubble! And if people can’t afford to buy any longer, even with super-low interest rates, well, they can step down to a fancily equipped micro-condo, or more commonly called shoebox condo, where the dining table might fold into a bed.

But suddenly we get a nerve-wracking disturbance in this beautiful picture:

National Bank Financial said in a note to its clients that, based on data from Canada Mortgage and Housing Corp., the number of completed but unsold condos in Toronto spiked in May to 2,837, an all-time record high.

So the monthly data is choppy and may not be very reliable. It’s an estimate, and estimating new and unsold condos isn’t that easy. But the magnitude of this spike far exceeds the monthly ups and downs in recent years, and exceeds even those dizzying spikes in the late 1980s and early 1990s when the Toronto condo market went completely haywire.

But it wasn’t just one month. The count had edged up in April to hit 2,038 after having already spiked beautifully in March to the highest level since the early 1990s. This is what this phenomenon looks like:

The report blamed the absorption rate, a measure of condos that have been completed during the month and were either sold or rented. It plunged to 69.5%. But don’t worry. “It would be premature to think that the absorption rate will stay low, causing persisting accelerated increases in the number of vacant completed condos,” the note said to mollify client anxieties.

OTTAWA (Reuters) – Canada’s federal housing agency softened its forecast for housing starts in 2015, saying it expects the pace of new home construction to gradually moderate in the coming years.

Although the Canada Mortgage and Housing Corp said on Friday it expects employment and disposable income to continue to support the country’s robust housing market, it noted the downside risks have increased since its October forecast because of the decline in oil prices.

As such, the CMHC said it had widened its forecast ranges for starts, sales and average prices.

“Lower oil prices will negatively affect oil-producing economies like Alberta, Saskatchewan, and Newfoundland and Labrador, which will only be partly offset by the positive effects of lower exchange rates and interest rates across all provinces,” said CMHC’s chief economist Bob Dugan.